← “When economic activity was organized according to the principles of property, contract, and liability, a society could tolerate peaceably a variety of such life-styles because those who conducted more costly patterns of life would pay for them…
“The New York Times Editorial Board’s, “Homeownership and Wealth Creation” got it half right. Homeownership (with a mortgage) can be risky, but taking those risks has historically, over-time allowed average Americans to build significant wealth vs. renting… →

“If one in seven appraisals are currently inflating home values by 20% or more, why aren’t Fannie, Freddie, FHA, and VA stepping up lender buybacks and instead recently announced policies that act to reduce them? And why aren’t the banking regulators doing more than “reviewing the issue”? I will tell you why…

…The WSJ article below, “Dodgy Home Appraisals..”, is nonsense. These are the same type of “red herring” allegations that pre-crisis investors in mortgages and MBS erroneously claimed (and never proved) to inappropriately blame their billions in housing bubble/bust losses on banks, mortgage lenders and securities underwriters. The federal government determines and enforces the appraisal standards for homes in America (and has for decades). With the benefit of hindsight and now an outsider’s perspective, I believe the problem with residential appraisals are that they are based solely on market comparables. No other type of real estate uses market comparables as the sole or even primary method to determine value. These other types of real estate primarily use estimated lifetime net rents (after expenses) discounted back to the present period to determine value. I believe this difference is the inherent flaw in U.S. home appraisals and post-crisis nothing has been done to address this flaw. Instead, a lot of ridiculous and costly, form-over-substance, rules and regulations for home appraisals have been implemented that don’t solve the real problem. Tension and pressures between appraisers, Realtors, and mortgage lenders are natural and in my view healthy. Are appraisers so meak they can’t stand this? The problem isn’t fraud or undue pressure, it is the fact that market comparable appraisals act to confirm (directionally) bubble and bust prices, not refute them. A better approach, that addresses the real problem, would be to have home appraisals that are based on “net rents”. That’s what all the sophisticated institutional investors used to determine whether or not to buy single family homes in bulk and that’s what everyone uses to value every other type of real estate. (Also, think about the firm who found the alleged appraisal errors. If they don’t find errors, they won’t get much future work, will they?)”, Mike Perry, former Chairman and CEO, IndyMac Bank

“An estimated one in seven appraisals conducted from 2011 through early 2014 inflated home values by 20% or more, according to data provided to The Wall Street Journal by Digital Risk Analytics, a subsidiary of Digital Risk LLC. The mortgage-analysis and consulting firm based in Maitland, Fla., was hired by some of the 20 largest lenders to review their loan files.The firm reviewed more than 200,000 mortgages, parsing the homes’ appraised values and other information, including the properties’ sizes and similar homes sold in the areas at the times. The review was conducted using the firm’s software and staff appraisers.”, AnnaMaria Andriotis, “Dodgy Home Appraisals Make a Comeback”, Wall Street Journal

Home appraisers are inflating the values of some properties they assess, often at the behest of loan officers and real-estate agents, in what industry executives say is a return to practices seen before the financial crisis.

An estimated one in seven appraisals conducted from 2011 through early 2014 inflated home values by 20% or more, according to data provided to The Wall Street Journal by Digital Risk Analytics, a subsidiary of Digital Risk LLC. The mortgage-analysis and consulting firm based in Maitland, Fla., was hired by some of the 20 largest lenders to review their loan files.

The firm reviewed more than 200,000 mortgages, parsing the homes’ appraised values and other information, including the properties’ sizes and similar homes sold in the areas at the times. The review was conducted using the firm’s software and staff appraisers.

Bankers, appraisers and federal officials in interviews said inflated appraisals are becoming more widespread as the recovery in the housing market cools. While home prices are increasing generally, their appreciation is slowing, and sales have been weak despite low interest rates. The dollar amount of new mortgages issued this year is expected to be down 39% from last year, at about $1.12 trillion, according to the Mortgage Bankers Association.

That has put increasing pressure on loan officers, who depend on originating new mortgages for their income, as well as real-estate agents, who live on sales commissions. That in turn is raising the heat on appraisers, whose valuations can make or break a sale. Banks generally won’t agree to a mortgage if the purchase price or the refinancing amount is higher than the appraised value.

The practice is garnering broader notice. The Office of the Comptroller of the Currency is reviewing the mortgages banks are doling out, concerned that some of them are based on inflated values, according to Darrin Benhart, a deputy comptroller who focuses on identifying areas of risk in the federal banking system. The OCC oversees national bank and federal savings associations lending practices. Separately, Freddie Mac , the mortgage-finance giant, said it has opened fraud investigations related to appraisals of homes backing mortgages it bought.

Almost 40% of appraisers surveyed from Sept. 15 through Nov. 7 reported experiencing pressure to inflate values, according to Allterra Group LLC, a for-profit appraiser-advocacy firm based in Salisbury, Md. That figure was 37% in the survey for the previous year.

“If you thought what was happening before was an embarrassment, wait until the second time around,” said Joan Trice, Allterra’s chief executive and founder of the Collateral Risk Network, which represents appraisers employed by lenders and other companies and has been meeting with regulators to discuss concerns about appraisers being pressured into inflating values.

To determine a home’s value, appraisers assess a property’s condition, size and location, among other factors. They use similar properties that have been recently sold as one key basis for comparison.

Digital Risk found that some appraised values were off the mark based on discrepancies that appeared unintentional, though, “at other times, the appraiser’s selection of [comparable properties]…is very hard to justify,” said Thomas Showalter, chief analytics officer at Digital Risk. The firm saw cases where values for decades-old homes were determined based on sales prices for newly constructed ones, and homes blocks from shorelines were compared with waterfront properties, he said. 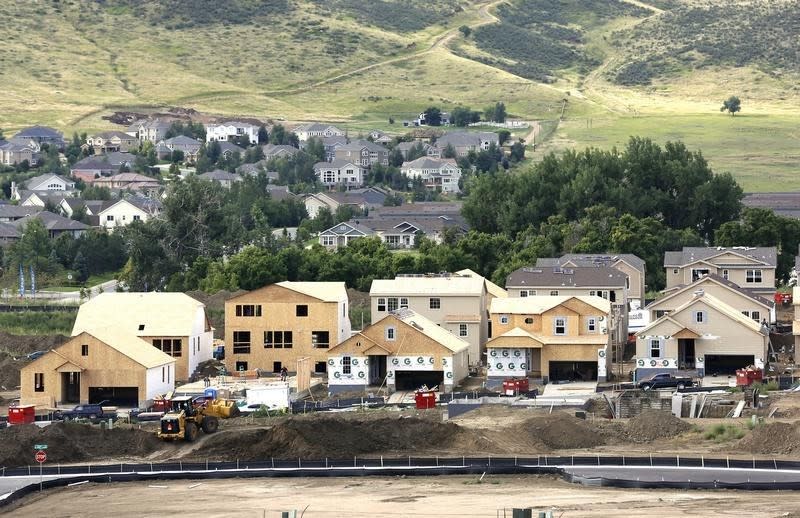 New houses under construction in Golden, Colo., in August. Some in the mortgage industry say inflated home appraisals are increasingly a problem. Reuters

To be sure, inflated appraisals aren’t a problem everywhere. Real-estate agents, for example, say they sometimes encounter appraisals that come in below the agreed-upon purchase price and derail the deal.

Twenty-four percent of real-estate agents surveyed in March 2014 reported that low appraisals resulted in sales contracts being canceled, delayed or negotiated to a lower price, according to the latest data from the National Association of Realtors. But that figure has been declining in recent years: In March 2013, 29% of agents reported such problems, and the figure was 31% in March 2012.

“It’s a daily thing,” Mr. Boudreau says. “They say, ‘Your appraiser is incompetent. They don’t know what they’re doing.’ ” In such instances, Mr. Boudreau says he tells the real-estate agents to contact the loan officer handling the borrower’s application with evidence the appraiser undervalued the home.

Much of the pressure, appraisers say, is being applied by companies hired by banks to assign appraisal work, known as appraisal-management companies, or AMCs. A much larger share of appraisals have been filtered through these companies since the introduction of new financial rules and other requirements that seek to prohibit appraiser coercion.

Banks turned to AMCs to help maintain a distance between loan officers and appraisers. That distance is intended to eliminate pressure on the appraiser to hit a certain price. But some in the industry say AMCs are now applying pressure in a bid to keep the lenders’ business.

Within lenders’ ranks, tensions are also rising. While loan officers may be trying to boost the number of home loans they give out, their superiors and risk officers are charged with ensuring the quality of those loans.

“The lender is held accountable—they need the appraisal to be accurate and to defend it years down the road,” said Michael Fratantoni, chief economist at the Mortgage Bankers Association. He cited the agreed-upon purchase price as among the best measures of a home’s value.

Tom Allen, who says he has been an appraiser for 44 years, recalled appraising a house in April for about $450,000 for a loan application with J.P. Morgan Chase & Co. About a week later, Mr. Allen, 68 years old, says he received a request from the appraisal-management company to use two different properties as comparables that had recently sold for around $525,000 and $540,000. Mr. Allen says he refused because the homes were larger, in a more expensive neighborhood and built about 10 years after the property in question. Since then, Mr. Allen says he mostly accepts appraisal requests for homes that have several similar nearby sales.

Mr. Allen declined to name the AMC. “If they get negative feedback from an appraiser in a small market they’re in, it’d be easy for them to never give me any more work,” he said.

It isn’t uncommon for the lender or the loan applicant to supply comparable sales if there are legitimate concerns with the appraisal report, said George Demopulos, vice president of the National Association of Appraisal Management Companies, which is based in Providence, R.I. The group represents about a dozen AMCs that receive assignments from large and small lenders and who work with thousands of appraisers across the country.

Mr. Benhart, of the Office of the Comptroller of the Currency, first warned of problems with how banks review appraisal reports last year in a speech to mortgage bankers. He says the agency has been spending more time at banks this year scrutinizing the home-valuation paperwork used to help originate mortgages. The OCC found cases in which bank staff didn’t have enough training, Mr. Benhart said. In some cases, for example, they didn’t have experience with the type of property or the area, he said. It also found banks that didn’t thoroughly check reports or provide oversight of AMCs.

“This is rising as a risk,” said Mr. Benhart.

Freddie Mac has found cases of appraisers submitting a suspiciously high number of reports in one day, as well as reports for properties in places where they aren’t certified or licensed to operate, according to a spokesman. It has also received tips from employees at lenders and other insiders warning of inflated valuations, he said.

The firm is looking “into whether or not some of the lines have been crossed from compliance to noncompliance with regard to appraisal independence,” he said. “We are watching it closely and are very aware of the issues.”

Posted on December 2, 2014, in Postings. Bookmark the permalink. 1 Comment.

← “When economic activity was organized according to the principles of property, contract, and liability, a society could tolerate peaceably a variety of such life-styles because those who conducted more costly patterns of life would pay for them…
“The New York Times Editorial Board’s, “Homeownership and Wealth Creation” got it half right. Homeownership (with a mortgage) can be risky, but taking those risks has historically, over-time allowed average Americans to build significant wealth vs. renting… →