← “It’s hard to conceive of a more destructive national policy (federal student loan policies) – encouraging tuitions to rise and students to avoid productive enterprise while burdening taxpayers with another unsustainable entitlement.”, Wall Street Journal Editorial Board
“The Fed’s multibillion-dollar assistance to financial institutions – including lending commitments to Citigroup and Bank of America, supporting J.P. Morgan’s purchase of Bear Stearns, rescuing AIG and through that aid to Goldman Sachs and many others – occurred without transparency… →

“I thought it was illegal to require prospective employees to possess some skill or expertise that is not required to perform the job? Requiring a college degree for almost any position is unnecessary and should be illegal. Today, we can test job candidates on what they actually know and can do and that and what they have accomplished is all that should matter…

…In fact, my personal bias is where two candidates have accomplished roughly the same in their careers and test roughly the same (for what they know and can do)…I always hire the one who has the less prestigious education, because I know they overcame more. (And by the way, this college requirement makes our trillion dollar student loan problem worse!!!)” Mike Perry 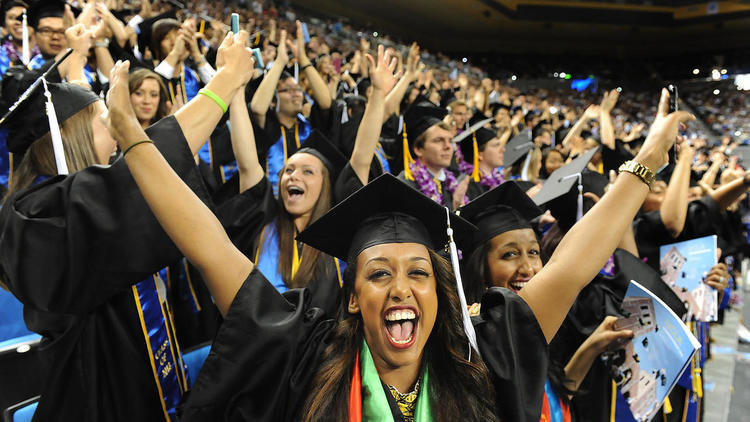 UCLA’s commencement in 2013. A report from Burning Glass found that more employers are asking for college degrees for positions that previously didn’t require them. (Wally Skalij / Los Angeles Times)

By TIFFANY HSUcontact the reporter

Landing a job that leads to a middle-class living may be getting harder for the two-thirds of American workers who aren’t college graduates, as more employers demand bachelor’s degrees from applicants, according to a new report.

Fewer than 20% of currently employed executive secretaries and executive assistants have B.A.s, but now 65% of postings for such roles require the degree. The occupational groups with the largest disparities are management, office and administrative services and business and financial operations.

Researchers, working with millions of job postings aggregated from more than 40,000 websites as well as government data, also determined that so-called credential inflation often drags out the time it takes for employers to fill open spots.

Over time, as more workers retire, many positions could come increasingly difficult to staff, according to researchers.

“Especially if these are production jobs, involved in key operation activities of a company, if they take extra time to fill, that’s a significant problem,” said Burning Glass Chief Executive Matt Sigelman. “Both rising costs and the inability to get talent could make America less competitive over time.”

Some occupations – such as registered nurses and drafters – now require a higher skill level and technological aptitude than they once did, which likely explains the surge in demand from employers for college graduates.

But some employers may be requesting B.A.s as a way to filter through candidates, not because the talents developed in college would help on the job.

Nearly half of IT help desk jobs now want a graduate, even though the skills required are the same as those requested by employers who are less picky about academic credentials.

“The open question is whether employers are requiring a college degree because those job seekers bring something that lower levels of credentials don’t, or whether it was a rule-of-thumb filter that someone put in along the way,” Sigelman said. “Is it a conscious decision or something that’s just sort of happened?”

Jobs in healthcare and engineering fields, which have established licensing or accreditation processes, are more immune to credential inflation.

And in Los Angeles, the gap exists but is narrower than it is nationally.

Employers in the metropolitan area are just as likely as their counterparts nationwide to require college degrees. But because Los Angeles is an urban hub, it tends to attract a higher concentration of well-educated workers than more rural regions – 39% of the workforce has a college degree, compared to 30% nationwide.

In Los Angeles, 45% of postings calling for supervisors of mechanics, installers or repairers wanted applicants to be college graduates; 23% of such workers locally fit the bill. Nationally, 48% of the same job ads sought degreed candidates, but only 14% of such workers met the criteria.

But higher expectations from employers mean that even college graduates are having trouble finding work.

“You come to L.A. with high aspirations and wind up working as an administrative assistant – it’s likely not what you thought you would be doing when you went to college and took on all the debt that you did,” Sigelman said. “If what you’re doing is the same job that your parents were able to get without a college degree, that’s probably not a victory.”

Posted on September 10, 2014, in Postings. Bookmark the permalink. Leave a comment.

← “It’s hard to conceive of a more destructive national policy (federal student loan policies) – encouraging tuitions to rise and students to avoid productive enterprise while burdening taxpayers with another unsustainable entitlement.”, Wall Street Journal Editorial Board
“The Fed’s multibillion-dollar assistance to financial institutions – including lending commitments to Citigroup and Bank of America, supporting J.P. Morgan’s purchase of Bear Stearns, rescuing AIG and through that aid to Goldman Sachs and many others – occurred without transparency… →