← “It is extremely distressing that a select few insiders have been getting an early look at public filings for so long. It violates the basic principles of fairness that underpin our markets, and I urge the SEC to put a stop to this as soon as possible.”, Rep. Carolyn Maloney (D., N.Y.), ranking Democrat on the House Financial Services Committee’s panel that has jurisdiction over capital markets.
“A Yuba County jury awarded $16.2 million in damages to a Plumas Lake homeowner who nearly lost his home to foreclosure after his loan servicer mishandled his mortgage…But the presiding judge has decided the jury got it mostly wrong… →

“Mortgage lenders dodged the proposed rule by joining homebuilders and advocates of low-income homeownership to convince hundreds of lawmakers that defining supersafe mortgages as those with significant down payments would curtail mortgage lending to the struggling middle class and poor.”, Eduardo Porter, “More Renters, Less Risk for Wall St.”, New York Times

Is it time to temper the American dream of homeownership?

If you want to curb the power of Wall Street and reduce the risk that the financial system will bring the rest of the economy tumbling down again, there may be no other choice.

Consider what happened last week, when regulators pretty much threw in the towel on new rules requiring mortgage bankers to keep on their books a minimum share of all but the safest loans.

The idea was perfectly reasonable — a way to keep bankers’ “skin in the game” to encourage prudence. In the end, however, officials decided that just about all mortgages were supersafe. No need for banks to keep a chunk.

“The loophole has eaten the rule,” Barney Frank, the former chairman of the House Financial Services Committee and co-author of the Dodd-Frank financial overhaul, told my fellow columnist Floyd Norris last week. “There is no residential mortgage risk retention.”

Phillip L. Swagel, an economist at the University of Maryland who was an assistant secretary of the Treasury under George W. Bush, called the decision simply “perplexing.”

The reason for the about-face, though, is not exclusively, or even mainly, the formidable power of the Wall Street lobby. The ability of the financial industry to fend off attempts to hem it in also relies on an argument that is difficult for outsiders to refute: We cannot live without it.

Unable to determine the risk that finance imposes on the broader economy, voters — and the politicians they put in office — have a strong incentive to give the industry a pass.

“What is the cost of a crisis I don’t prevent against what is the cost to tame finance?” asked Alan M. Taylor, an economist at the University of California, Davis. “We’ve only been thinking about this for a short time.”

Mortgage lenders dodged the proposed rule by joining homebuilders and advocates of low-income homeownership to convince hundreds of lawmakers that defining supersafe mortgages as those with significant down payments would curtail mortgage lending to the struggling middle class and poor.

That argument, while only partly related to the notion of requiring lenders to have skin in the game, pretty much stopped a central tenet of financial reform.

The breakneck growth of our modern banking system closely tracks the rise of the long-term home mortgage. A recent study by Professor Taylor, Òscar Jordà of the Federal Reserve Bank of San Francisco and Moritz Schularick of the University of Bonn found that mortgage lending across the industrialized world rose from the equivalent of 20 percent of annual economic activity at the start of the 20th century to about 69 percent in 2010.

In 1928, mortgages accounted for 39 percent of American banks’ lending to nonfinancial private companies. By 2007, on the eve of the financial crisis, the share was 68 percent.

“The changing nature of financial intermediation has shifted the locus of crisis risk towards mortgage lending booms,” the authors wrote. Financial reform that gives mortgages a pass is not going to cut it.

Most Americans have an interest in being able to obtain a reasonably priced mortgage. But there is a fundamental tension between Wall Street’s interests and those of the rest of us.

Financial institutions will naturally prefer to take more risks. After all, for them risk-taking has historically carried a lot of upside and, with taxpayer funds as the ultimate backstop, only a limited downside. Ordinary people have a very different experience.

“Financial deregulation is similar to relaxing rules on nuclear power plants,” argue Anton Korinek of Johns Hopkins University and Jonathan Kreamer of the University of Maryland in a working paper for the Bank for International Settlements. It makes it easier and more profitable for the utilities, their shareholders and executives. It might also help ordinary Americans get cheaper electricity. “However, it comes at a heightened risk of nuclear meltdowns that impose massive negative externalities on the rest of society.”

Tightening mortgage rules would no doubt make it more difficult to buy and sell homes. It would lead to more renters and fewer homeowners.

That might be worth it, though. Germany is doing fine with a homeownership rate of 45 percent, compared with about 65 percent in the United States, which is actually down from a peak of near 70 percent in 2004.

The Explosion of Mortgage Finance

Mortgage lending has led the growth of the financial system since World War II, according to a new study of 17 industrialized nations, including the United States and most of Western Europe. 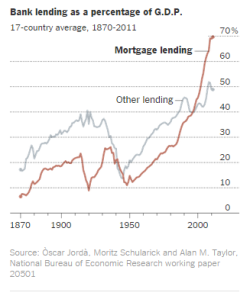 Sheila C. Bair, who ran the Federal Deposit Insurance Corporation throughout the buildup of the mortgage bubble and its implosion, argues that a policy of pushing mortgages for every American family is hardly ideal.

“There is this religion about homeownership being the primary path to wealth accumulation — notwithstanding the bad experience we’ve had with it,” she said.

Indeed, in an uncertain economy with so little job security, it makes less sense for policy to encourage workers to lock themselves into mortgages. Even when homeownership is the right call, “I don’t think low-income people should be in private-label subprime mortgages,” she added. That is what the Federal Housing Administration is for.

Yet this is a Rubicon that our elected officials are afraid to cross. “On the margin, regulation does increase the cost of credit in the good times,” Ms. Bair said. “Regulators are battling a political system that wants to let the good times roll.”

Still, many experts say Washington is at least moving in the right direction. “Regulations are putting the system in much better shape than it was,” said Douglas J. Elliott, a former banker at J. P. Morgan who is now at the Brookings Institution in Washington.

This is not merely a self-serving, American view. Across the Atlantic, John Vickers, a professor at Oxford and the former head of Britain’s Independent Commission on Banking, agrees. “I wish there had been greater steps,” he said. “But major steps have been made toward a less fragile system.”

Is this enough to close the gap between Wall Street’s unbridled appetite for risk and the broader public interest?

The problem is, as long as we can’t precisely measure the cost of financial excess, we will be prone to believe that the financial industry is simply too fragile to be meddled with.

And with growth disappointing in just about every developed country, many people may be willing, even eager, to roll the dice again.

Despite all the new efforts at regulation, Ariell Reshef of the University of Virginia noted, “there’s maybe a slowdown in the growth of finance, but not a reversal.”

In a study published last year, Professor Reshef and Thomas Philippon of New York University concluded, “If finding more growth opportunities becomes ever harder with development, then a larger financial output and a larger share of income may be needed to sustain growth.”

Professor Vickers cited another paradox. “Ironically, the macroeconomic damage done by the crisis shows how important a well-functioning banking sector is,” he said.

The question is whether our banking sector is well functioning.

A version of this article appears in print on October 29, 2014, on page B1 of the New York edition with the headline: More Renters, Less Risk for Wall St..

Posted on October 29, 2014, in Postings. Bookmark the permalink. Leave a comment.

← “It is extremely distressing that a select few insiders have been getting an early look at public filings for so long. It violates the basic principles of fairness that underpin our markets, and I urge the SEC to put a stop to this as soon as possible.”, Rep. Carolyn Maloney (D., N.Y.), ranking Democrat on the House Financial Services Committee’s panel that has jurisdiction over capital markets.
“A Yuba County jury awarded $16.2 million in damages to a Plumas Lake homeowner who nearly lost his home to foreclosure after his loan servicer mishandled his mortgage…But the presiding judge has decided the jury got it mostly wrong… →