← “…Kuehl’s (successful Los Angeles County Board of Supervisors) campaign benefited from about $3 million in spending by public employee unions, including $1.3 million from groups representing county firefighters and deputy sheriffs…
“On campuses across the country, hostility toward unpopular ideas has become so irrational that many students, and some faculty members, now openly oppose freedom of speech. The hypersensitive consider the mere discussion of the topic of censorship to be potentially traumatic. Those who try to protect academic freedom and the ability of the academy to discuss the world as it is are swimming against the current… →

“Do I understand this correctly? The UC system is going to increase its student population by 5,000 (from its current 166,250 level) over the next five years…that’s about ½ of 1% student growth a year. So why do they need ten times that level, 5%, in annual tuition increases? The LA Times article below makes abundantly clear why: It’s the unsustainable California public pensions (a pervasive problem in California)…

…Not only does this hurt the largely middle-class UC students and their parents, but these UC’s also are turning away many qualified California kids, in order to get higher tuition revenues from out-of-state students (to help fund these rich and unsustainable pensions and benefits).”, Mike Perry 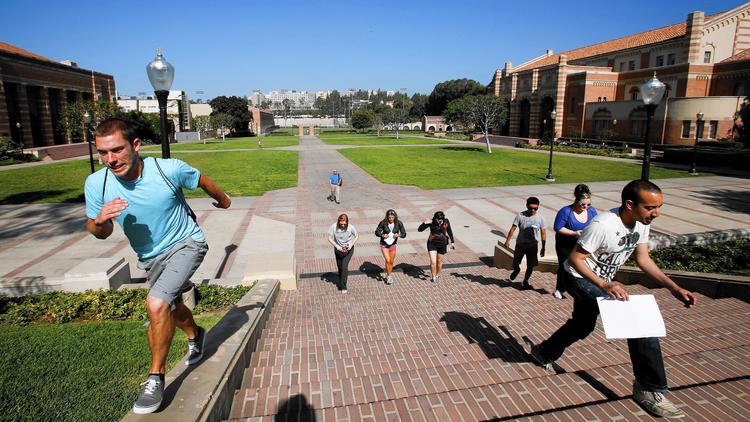 UC students
Leaders at the University of California are proposing what they call a “worst-case scenario” plan for raising tuition for students systemwide over the next five years. (Mel Melcon / Los Angeles Times)

For the first time in four years, UC leaders are proposing tuition hikes — as much as 5% in each of the next five years — to help cover rising costs and to expand the enrollment of California students.

For undergraduates who are California residents, tuition next year could rise to $12,804, not including room, board and books. By the 2019-20 school year, that could increase to $15,564.

UC needs more money to help cover rising costs of retirement benefits, fund recent pay increases in employee contract settlements, hire more faculty and raise the number of California undergraduates by 5,000 over five years from the current 166,250, according to the proposal being formally released Thursday.

Given all those pressures and goals, a tuition freeze could not continue into a fourth year, UC system President Janet Napolitano said. 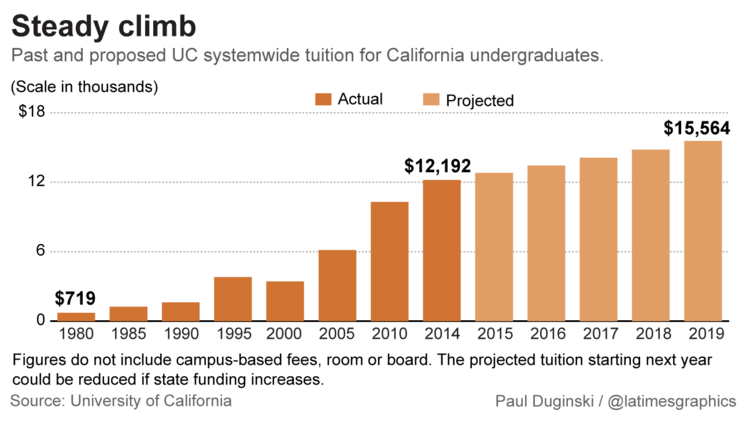 “The three-year hiatus was about as long as was wise,” said Napolitano, who became UC president just over a year ago after serving as U.S. secretary of Homeland Security and Arizona governor.

Napolitano said tuition hikes could be reduced or even eliminated in all or some of the years if state funding for UC rises above the 4% annual increases currently anticipated. But a major hurdle is the opposition from Gov. Jerry Brown, who objects to the hikes.

If the state doesn’t increase its UC spending, Napolitano said, she wanted to provide the 10-campus university and its 238,400 students a more dependable, longer-range and moderate schedule of increases. This comes in contrast to the steeper and erratic hikes imposed on students before tuition was frozen for the last three years, she said.

The proposed series of 5% increases “is the worst-case scenario for California students and their families, but it is a very predictable scenario,” she said in an interview.

The proposal is scheduled to be debated and voted on by the UC regents at their Nov. 19-20 meeting in San Francisco, a gathering that could attract sizable student protests if history is repeated. Key regents said they expect the board will approve the plan.

Brown, who serves on the regents board, won voter approval for tax increases two years ago that helped make the tuition freeze possible.

“The governor remains opposed to a tuition hike on students. Increased funding for UC in the governor’s budget is in fact contingent on tuition remaining flat,” said H.D. Palmer, a spokesman for the state Department of Finance, speaking on behalf of the Brown administration.

Palmer said that, in exchange for no tuition increases, Brown had committed to raise UC and Cal State funding by 5% each for two years starting in 2013-14, and then 4% for another two years through 2016-17. Asked what the governor would do if the regents raise tuition, Palmer said: “We are not going to get ahead of what the regents are going to or not going to do.”

The proposal is sure to face some student opposition. Even before Napolitano’s plan was detailed, the UC Student Assn. last week began a petition drive asking the regents to continue the freeze or to reduce tuition. “We have the right to seek long-term, sustainable funding sources that take the burden off students, and not only freeze tuition, but roll back tuition,” the online petition said.

Including various campus charges, room, board and books, the annual cost of a UC education now can total more than $30,000 for California residents; the growing number of students from other states and nations pay about $23,000 on top of that.

Officials, however, note that only about 30% of UC undergraduates from California pay the full amount for their current $12,192 tuition, and the rest receive some financial aid. With federal, state and university grants and tax credits, about half have all their tuition covered, UC said.

Under the plan, a third of the tuition revenue would continue to be devoted to financial aid. And the state’s new Middle Class Scholarship program will provide some relief to families earning as much as $150,000 a year.

UC tuition and basic fees tripled over the decade starting in 2002, with a series of controversial hikes as high as 30% in a single year. The recession and its deep impact on tax revenue led to steep cuts in state funding for UC.

But as the recession lifted and voters approved the temporary tax hikes in Proposition 30, prospects improved and, under pressure from Brown, UC has kept tuition stable since 2012. Still, UC officials say that the $2.64 billion in state general revenue funds for UC this year is $460 million below what it was seven years ago.

The extra revenue would help to hire more faculty, add classes, make it easier for students to graduate within four years and enroll more in-state students.

Many parents and state legislators are angry that UC has sharply boosted the number of out-of-state undergraduates — now about 20% of freshmen — for the extra tuition they pay. Napolitano said she expects the regents will look at possible limits on non-residents after the financial picture becomes clearer in upcoming months.

But her plan calls for out-of-staters to pay 5% more each year in basic tuition plus 5% more annually in their supplemental charges.

Graduate and professional school students face the 5% hikes too, and many of them would see even higher bills.

About 14,000 graduate students in more than 50 programs such as law, medicine, social work and business also must pay so-called professional degree supplemental tuitions that range from $4,000 to $38,500, and those would go up by as much as 5% annually as well. Some master’s programs in nursing would see a one-time 20% rise.

Student regent Sadia Saifuddin said most students “are not going to be too happy about this” and she feared that middle-income students would feel the increases most. She placed much of the blame on state funding, which she said proved to be far less than Brown implied it would be when he urged UC students to vote for Prop. 30 two years ago.

“What we are looking at is UC being backed into a corner, making a difficult decision and putting the burden of the quality of the university on students’ backs,” she said. A UC Berkeley student, Saifuddin said she had not decided yet how she would vote on the measure at the regents meeting. One of the few upsides, she said, is that it would allow students to plan ahead financially, unlike past, sudden tuition increases.

Bruce Varner, the Riverside attorney who is chairman of the regents board, said he expects “a robust discussion, of course, and a lot of different ideas” about tuition at the upcoming meeting. He said he expects a majority of regents will support the plan as long as the commitment to increase financial aid is kept.

The proposal brings “a consistent and stable approach to tuition that can be adjusted and hopefully adjusted downward depending on what the state does,” he said.

Regent Russell Gould, who is chairman of the board’s long-range planning committee, said he too expects it will pass after facing some initial public opposition.

“Tuition is always sensitive but I think if we don’t surprise people and it’s modest, people understand,” said Gould, who is former director of the state Department of Finance. “They want their degrees to mean something and we want to protect the quality of the education at the university.”

UC investigated alternative plans such as charging different tuition levels by majors or campuses and possibly delaying tuition bills until after students graduate. Napolitano said all of those ideas proved too complicated and difficult to administer, and would possibly raise arguments among departments and campuses.

Posted on November 6, 2014, in Postings. Bookmark the permalink. Leave a comment.

← “…Kuehl’s (successful Los Angeles County Board of Supervisors) campaign benefited from about $3 million in spending by public employee unions, including $1.3 million from groups representing county firefighters and deputy sheriffs…
“On campuses across the country, hostility toward unpopular ideas has become so irrational that many students, and some faculty members, now openly oppose freedom of speech. The hypersensitive consider the mere discussion of the topic of censorship to be potentially traumatic. Those who try to protect academic freedom and the ability of the academy to discuss the world as it is are swimming against the current… →