← “Greece has never been a self-sustaining country. The U.K. has a population of about 65 million and has about 500,000 civil servants. Greece has 11 million and its civil service has 790,000 people. If you add their families, we are talking about three million people, or about 30% of Greece. What can any Greek government do about that?”, D.P. Marchessini, London (Excerpt from WSJ Letter to Editors)
“Clearly, the SEC’s current securities fraud (disclosure) cases against the CEO’s and CFO’s of Fannie and Freddie, provide strong evidence to support your point about the non-disclosure of NTM’s (nontraditional mortgages) pre-crisis. I had no idea that by June 2008 that roughly 57% of all mortgages in the U.S. were NTM’s and I sure didn’t have any idea that Fannie, Freddie, FHA, and VA owned, insured, or guaranteed 76% of these NTMs (via whole loans or securities)… →

“I am FOR school testing standards and the accountability of teachers and administrators, but prosecuting them under RICO laws for cheating is wrong and un-American!!! Teachers and administrators who cheated should be fired, not put in jail. But it’s also outrageous and un-American for Andrew Young to clamor for the jailing of bankers, with no knowledge (on his part) of wrongdoing.”, Mike Perry, former Chairman and CEO, IndyMac Bank

As sentencing nears for Atlanta teachers, many condemn their conviction 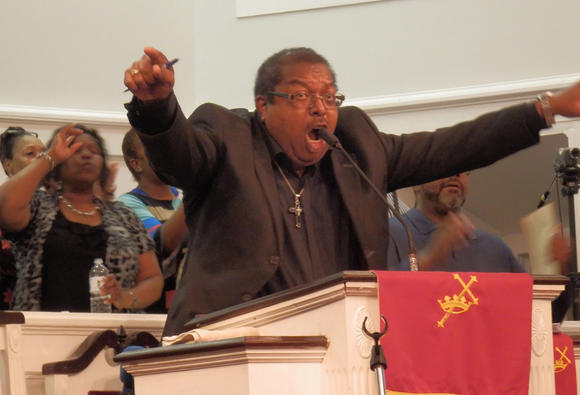 The Rev. Timothy McDonald, senior pastor at Atlanta’s First Iconium Baptist Church, addresses a rally in support of 11 Atlanta public school teachers and administrators who were convicted of cheating on test scores.

Bowing their heads in prayer, a congregation of teachers, pastors and civil rights activists pleaded for mercy.

While many civic leaders, including Mayor Kasem Reed, welcomed the guilty verdicts earlier this month as the final resolution of a scandal that roiled the city for nearly six years, some are uneasy about the prospect of teachers serving up to 35 years in jail.

Jurors in the Atlanta case — one of the largest academic misconduct trials in U.S. history — found 11 of 12 defendants guilty April 1 of violating Georgia’s Racketeer Influenced and Corrupt Organizations Act, a charge that carries a prison sentence of up to 20 years.

Some were also found guilty of additional felonies, such as influencing a witness, theft by taking, false swearing or making a false statement or writing.

Their supporters complain that the teachers and administrators — all African Americans who worked in low-income neighborhoods — were unfairly targeted with a racketeering statute popularly associated with mobsters and gangsters.

“Let me just say that this town is stirred up,” said Andrew Young, the civil rights leader and former U.S. Ambassador to the United Nations.

It made no sense, he said, for educators to face lengthy prison sentences when so many Wall Street financiers were spared after taking part in lending abuses that devastated the U.S. economy.

“It really made me angry to see teachers in handcuffs, because I’ve never seen a banker in handcuffs,” Young said. “To try this under a RICO statute was a sin and a shame, and the folk who did that will probably go to hell.”

Opinion on the sentencing is sharply divided across Atlanta. About 51% of those who responded to an online poll on 11 Alive.com, the website of the local NBC affiliate, said the convicted educators should serve prison time, while 49% said they should not.

After the verdict, former Gov. Sonny Perdue, a Republican who initiated the investigation into suspicious jumps in test scores in 2009, called the verdict “justice” for the “overwhelming number of passionate, dedicated Georgia educators.”

Yet even some parents of children who were taught by the convicted teachers have misgivings about lengthy jail sentences.

“Her sitting in jail is not going to help my daughter,” said Vanessa Haynes, whose 16-year-old daughter testified during the trial that her fourth-grade teacher, Angela Williamson, gave students answers to tests. Williamson faces up to 35 years in prison.

“What are they going to do now for the children?” Haynes said. “What I want is restitution. Rather than have the lady locked up, she should tutor my daughter until she completes college.”

The misconduct case sprang from a state investigation that implicated at least 178 teachers and administrators in “organized and systemic misconduct” in 44 Atlanta elementary and middle schools.

By 2011, more than 80 educators had confessed to test tampering — some immediately, and others later, in exchange for immunity from prosecution.

During the trial, prosecutors claimed that administrators set up a high-stakes testing system in which teachers received bonuses or were threatened with demotion, depending on students’ performance in standardized tests.

The result was that thousands of low-income African American students who struggled to read and write were denied the opportunity of federal funds for remedial education.

While cheating was undoubtedly wrong, Young said the teachers were not racketeers. “They were teachers who cracked under the heavy burdens a depressed society placed on them,” he said. “This is a time for us to judge by the spirit of the law and not the letter of the law.”

“It would not lift humanity to have 11 educators subjected to an ‘eye-for-an-eye’ sentence,” she said in a statement. The teachers were themselves “victims of a corrupt education system,” she argued, and “the systemic issues that have plagued APS and other educational entities should be considered when weighing sentencing.”

Fulton County Superior Court Judge Jerry W. Baxter has set sentencing for 10 of the 11 convicted educators for Monday. One, who was pregnant throughout the trial and delivered a son Saturday, remains free on bond and is likely to be sentenced in August.

All face a minimum of five years and a maximum of 20 years in prison for the racketeering charge. However, Judge Baxter has discretion to sentence them to probation or suspend the sentences altogether.

There were more than 200 RICO convictions across the United States in 2014, and the average prison sentence was just over 11 years, according to the Transactional Records Access Clearinghouse, which compiles federal government statistics.

Jay S. Albanese, a criminologist and professor at Virginia Commonwealth University who specializes in RICO cases, said the Atlanta educators were unlikely to receive “average” RICO sentences, however, as they did not have extensive prior criminal records and posed little danger to society.

Still, at the prayer vigil Tuesday night, many celebrated the convicted teachers as heroes who had been unjustly persecuted.

The crowd belted out gospel hymns and shouted “Hallelujah!” Some stomped the floor, while others stood on pews as a string of speakers, including a retired state judge and a former Atlanta school superintendent, railed against prosecutors and the judge presiding over the trial.

“The horrible face of white supremacy has rose again in black robes and blackface,” said First Iconium Deacon Tony R. Graves to thunderous applause. “I pray we will put a new face on the civil rights movement and make this a clarion call for everyone.”

Speakers urged the congregation to sign petitions, write to Judge Baxter and rally outside the courthouse as sentencing takes place Monday.

“If your minister doesn’t talk about this Sunday, you need to go on and find another church,” former Atlanta Public Schools Superintendent Dr. Jerome Harris told the crowd to loud whoops and cries of “Amen.”

Posted on April 13, 2015, in Postings. Bookmark the permalink. Leave a comment.

← “Greece has never been a self-sustaining country. The U.K. has a population of about 65 million and has about 500,000 civil servants. Greece has 11 million and its civil service has 790,000 people. If you add their families, we are talking about three million people, or about 30% of Greece. What can any Greek government do about that?”, D.P. Marchessini, London (Excerpt from WSJ Letter to Editors)
“Clearly, the SEC’s current securities fraud (disclosure) cases against the CEO’s and CFO’s of Fannie and Freddie, provide strong evidence to support your point about the non-disclosure of NTM’s (nontraditional mortgages) pre-crisis. I had no idea that by June 2008 that roughly 57% of all mortgages in the U.S. were NTM’s and I sure didn’t have any idea that Fannie, Freddie, FHA, and VA owned, insured, or guaranteed 76% of these NTMs (via whole loans or securities)… →