← “When Puerto Rico’s governor told lawmakers and citizens on Monday that the commonwealth could not pay its $72 billion in debt, many wondered how a small, seemingly low-key American island in the Caribbean could have amassed a debt big enough to crush it…
““Fannie and Freddie made a profit until they didn’t,” Mr. Hensarling said. “We are becoming a backstopped, bailed-out, bankrupt society.” Hensarling argues, all those loan guarantees make taxpayers vulnerable, just as the federal flood insurance program and the Pension Benefit Guaranty Corporation have weighed down the government’s balance sheet… →

“After years of neglect, state officials estimate it will cost $59 billion to fix the now-crumbling roads and freeways that Gov. Edmund G. “Pat” Brown championed more than five decades ago. And it’s up to his son, Gov. Jerry Brown, to find the money.”, The Los Angeles Times, July 1, 2015

“There is no difference between this $59 billion amount and borrowings/debt the State of California has incurred to fund deficits or other infrastructure projects. This is a liability of the people of the State of California that has been accruing and eventually the bill needs to be paid. We have to invest in decent California roads and related infrastructure. The fact of the matter is the State took DMV fees and auto and gas sales tax revenues and diverted them, from properly maintaining and improving our roads and related infrastructure, to other uses to produce annual budgets that were not really balanced (or had smaller deficits). Really, isn’t this a fraud by the politicians who have been running our State? How so? Hasn’t this massive “off-balance sheet” (“off-the-books”) liability ($59 billion or about $1,500 for every single 38.715 million Californian) allowed us to think our unsustainable (levels) of California government was sustainable, when it was not? (And this is just roads. What about the tens of billions of off-balance-sheet liabilities for unfunded and unsustainable California public pensions and retiree medical care?) How is this any different than Puerto Rico or Greece?”, Mike Perry 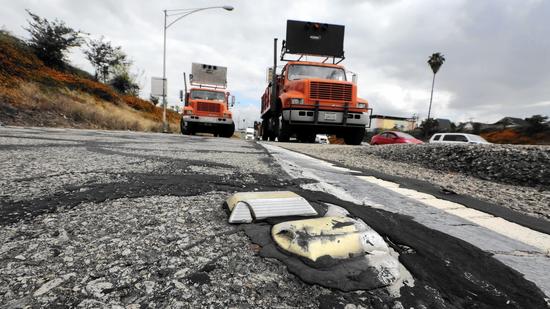 Officials estimate it will cost $59 billion to fix the state’s now-crumbling roads and freeways. Above, the Main Street offramp from the southbound 5 Freeway is repaired this month in downtown Los Angeles . (Mark Boster / Los Angeles Times)

Every day, California drivers navigate an obstacle course of potholes and cracked pavement, and a wrong turn of the wheel can send them limping to a mechanic. Maintenance crews can’t keep up.

After years of neglect, state officials estimate it will cost $59 billion to fix the now-crumbling roads and freeways that Gov. Edmund G. “Pat” Brown championed more than five decades ago. And it’s up to his son, Gov. Jerry Brown, to find the money.

Until now, Brown has focused on building what he hopes will be his own transportation legacy: a $68-billion bullet train connecting Los Angeles and San Francisco. 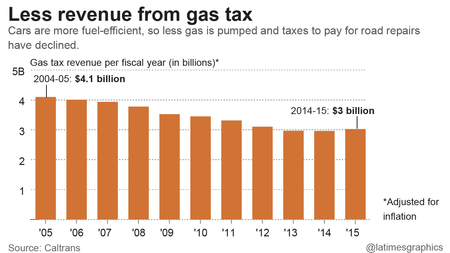 But the governor recently called a special legislative session to focus lawmakers’ attention on the problems with roads, and a hearing is scheduled for Thursday. The result could be new fees and taxes for drivers — a politically charged scenario in a state with a celebrated romance with the automobile.

The governor acknowledged recently that new costs could be controversial.

“But we do need more money,” Brown said, “and we’ve got to get it from somewhere.”

Despite the political risks, there’s potential for consensus in the Capitol. Groups that are normally at odds — Democrats and Republicans, unions and businesses — say they’re determined to work with the governor to find a solution.

“Everyone is trying to keep an open mind,” said Rob Lapsley, president of the California Business Roundtable, which represents most of the state’s largest corporations.

As Brown considers the future of California’s roads, he faces a political and financial landscape much different from the one his father inhabited. When Pat Brown was governor in the 1950s and ’60s, the state was benefiting from a flood of money from Washington for new roads for a growing number of Californians.

Now the federal fund for transportation improvements is going broke at the same time revenue from the state gas tax, California’s primary method of paying for road repairs, has waned with more fuel-efficient cars.

“Jerry has to address a tougher issue politically,” said Ethan Rarick, director of the Robert T. Matsui Center for Politics and Public Service at UC Berkeley.

Rather than rely on Washington to pony up, Brown may hope to draw new revenue from his constituents.

He hasn’t detailed any plans, and the combination of cars and taxes has been politically treacherous in the past. After former Gov. Gray Davis increased the vehicle license fee to help plug a budget deficit, Arnold Schwarzenegger seized on the issue for his successful campaign in the 2003 recall election.

This year, a push to fix the pocked roads that bedevil drivers could make new revenue more politically palatable.

Tax-averse organizations such as the California Business Roundtable and the state Chamber of Commerce said they would consider proposals from Democratic lawmakers to generate billions of dollars annually with new fees and higher levies on gasoline.

“As long as the money goes to transportation,” Lapsley said, business interests will listen.

Assembly Speaker Toni Atkins (D-San Diego) proposed a fee that would be roughly $50 a year for most drivers. Sen. James Beall Jr. (D-San Jose) wants a mix of revenue sources, including a 10-cent hike in the gas tax, higher registration fees and a gradual increase in the vehicle license fee.

Raising new revenue would require help from Republicans, because it needs a two-thirds vote in the Legislature. GOP lawmakers are reluctant to support increases, expressing disappointment that Democrats didn’t make room for new transportation funding in the budget that Brown signed Wednesday.

“It’s been an important priority that’s largely been ignored by the majority party,” Assembly Republican Leader Kristin Olsen of Modesto said. “That needs to end.”

Republicans are pushing other sources of funding including the state’s cap-and-trade program, which charges fees to polluters. Because the program applies to transportation fuel, said Senate Republican Leader Bob Huff of San Dimas, the money should be used for roads.

“If it’s going to be collected there, it ought to be spent there,” Huff said.

The Republicans’ proposal could conflict with Brown’s goals for the money, which include programs that could reduce driving — building the bullet train and supporting affordable housing near mass transit.

Raising the gas tax may seem like a straightforward solution. But that dwindling resource generates $5.7 billion less than what’s needed annually, according to the Brown administration.

And gas taxes push much of the burden of paying for road repairs onto poorer Californians, said Cesar Diaz, legislative and political director at the State Building and Construction Trades Council, a labor group.

“Gas taxes are just punishing those who have older cars,” Diaz said.

Addressing the problem could require Brown to reckon with some of his own policies, which include increasing the number of electric vehicles on the roads and reducing the use of gasoline — two goals that reduce proceeds from the tax.

In an attempt to spread the cost among drivers who don’t need to buy gasoline, Beall’s proposal includes an annual $100 surcharge on owners of electric cars.

That idea is opposed by the Brown administration, which has been trying hard to get more people behind the wheels of zero-emission vehicles.

“Calling out electric cars and having them paying a special fee runs counter to all of the financing incentives that we’ve done over the last number of years,” said Michael Cohen, the governor’s finance director.

Officials are exploring a different option: taxing drivers based on miles traveled instead of gasoline pumped.

But a pilot program, which could involve installing electronic devices in cars to track mileage, is not scheduled to begin until 2017. Until then, Brown has made it clear that he’s open to new fees or taxes.

“Everything is on the table,” he said when he announced the special legislative session. “I don’t know if you’ve seen my table. It’s a very big table.”

Posted on July 1, 2015, in Postings. Bookmark the permalink. Leave a comment.

← “When Puerto Rico’s governor told lawmakers and citizens on Monday that the commonwealth could not pay its $72 billion in debt, many wondered how a small, seemingly low-key American island in the Caribbean could have amassed a debt big enough to crush it…
““Fannie and Freddie made a profit until they didn’t,” Mr. Hensarling said. “We are becoming a backstopped, bailed-out, bankrupt society.” Hensarling argues, all those loan guarantees make taxpayers vulnerable, just as the federal flood insurance program and the Pension Benefit Guaranty Corporation have weighed down the government’s balance sheet… →