← “Fundraising is getting easier because pension funds, insurance companies, sovereign-wealth funds and other institutions increasingly are seeking the kind of yield the riskiest real-estate funds – known as “opportunity funds” – are offering…
“Rockstrom begins his argument with a reminder that for most of the earth’s 4.5-billion-year history its climate was not very hospitable to human beings, as it oscillated between “punishing ice ages and lush warm periods” that locked humanity into seminomadic lifestyles… →

“What??? I thought the science was long-settled that neutrinos have no mass? Of course not, because true science is never settled. It’s always open to debate and challenge.”, Mike Perry

“For more than half a century, we used to think that neutrinos are massless,” Olga Botner, a member of the Nobel Committee for Physics, said at the announcement Tuesday morning. “The discovery of neutrino oscillations at the turn of the millennium upset our notions.”, Amina Khan, “Two physicists earn Nobel Prize for discovering neutrino’s chameleon-like powers”, The New York Time, October 7, 2015 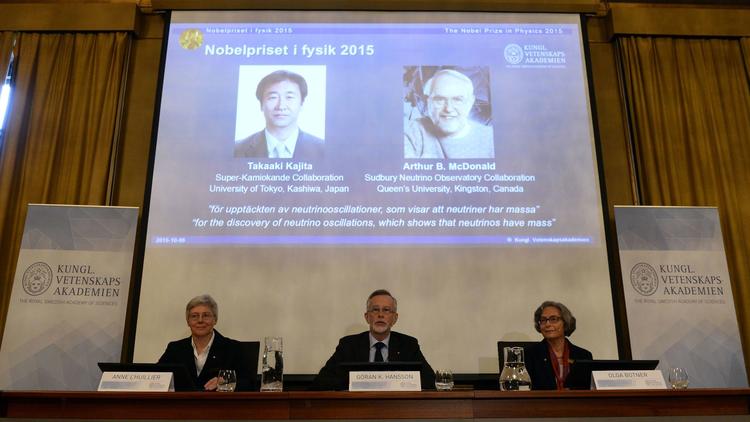 Portraits of Takaaki Kajita, left, and Arthur B. McDonald are projected behind Nobel Committee for Physics members at a news conference about the two prizewinners.

The 2015 Nobel Prize in physics has gone to two scientists for discovering the quirky, shape-shifting behavior of neutrinos — tiny ghostlike particles that fill the universe, traveling close to the speed of light.

Takaaki Kajita of the Super-Kamiokande experiment at the University of Tokyo and Arthur B. McDonald of the Sudbury Neutrino Observatory at Queen’s University in Canada were awarded the physics Nobel on Tuesday for their discovery that neutrinos oscillate — and thus, that they must have mass.

Small as these particles are, the scientists’ insight — that neutrinos are chameleon-like particles, switching identities in an instant — had massive implications for our understanding of the cosmos.

“For more than half a century, we used to think that neutrinos are massless,” Olga Botner, a member of the Nobel Committee for Physics, said at the announcement Tuesday morning. “The discovery of neutrino oscillations at the turn of the millennium upset our notions.”

Speaking via telephone, McDonald joked about being roused in the dark hours of the morning.

“As it turns out, I did not mind,” the particle astrophysicist told the Nobel committee during the briefing. 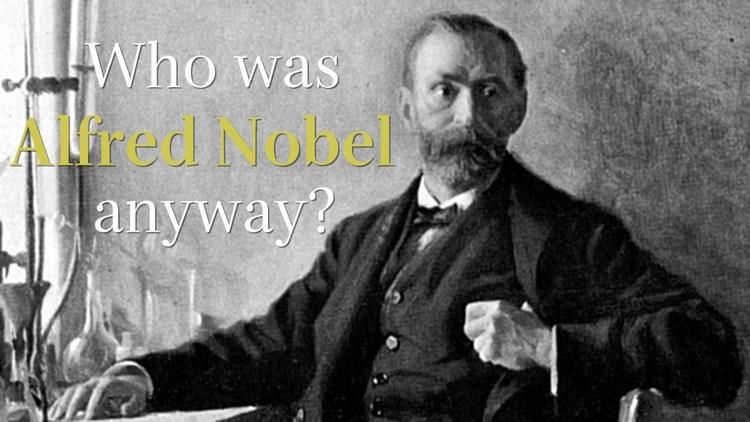 Alfred Nobel, the founder of the Nobel Prizes, channeled his interest in peace-related endeavors toward awards in science, medicine and the fraternity of nations.

McDonald said he had just seen Kajita last month at the Topics in Astroparticle and Underground Physics meeting in Italy.

“Neither of us had any idea at that time that this was happening,” he told The Times in an interview.

McDonald, who has four children and eight grandchildren, said he immediately hugged his wife and later in the day was able to celebrate over dinner with the children who were in town. His mother, who lives at a retirement home in Nova Scotia, was overjoyed.

In honor of his father, who passed away three years ago, the scientist wore a navy blue V-neck sweater that the elder McDonald used to wear. 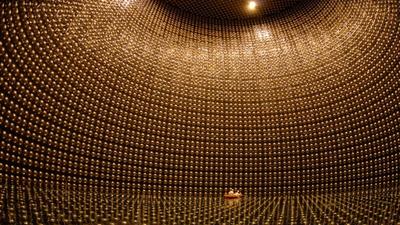 Using an underground neutrino detector in Japan, physicists may have found the key to answering a fundamental question: Why does our universe, as we know it, exist at all?
Scientists have caught tiny, ghostlike particles called neutrinos in the act of turning from one type into another using the…(Amina Khan)

“It’s something that I was very conscious of today, that he was not here,” McDonald said, calling his father “someone with whom I would love to be able to share this.”

Neutrinos are incredibly small, but what they lack in size, they make up for in number. There are so many neutrinos in the universe that trillions of them pass through your body every second. Even a slight change in how we see these particles can have enormous implications for our understanding of the building blocks of particle physics and of the cosmos as a whole.

Neutrinos have been around since the birth of the universe. They were produced during the Big Bang; they’re generated in the hearts of stars and high-energy events like supernovae as well as in the bellies of nuclear power plants. Before the discovery of neutrino oscillation, scientists knew that neutrinos came in three different flavors — electron neutrino, muon neutrino and tau neutrino.

But researchers had struggled to learn more because these particles are incredibly hard to detect. Neutrinos move through the universe like phantoms, easily passing through Earth as if the entire planet weren’t there. Catching them in action is like trying to grab a ghost.

“Neutrinos are nature’s most elusive particles,” Botner said. “They hardly ever interact.”

These slippery subatomic particles are so maddening that they even drove American novelist John Updike to write a poem titled “Cosmic Gall.”

“You call it wonderful; I call it crass,” Updike wrote of the elusive, Earth-piercing neutrino.

Although we can’t interact with them directly, neutrinos have probably played a major role in our very existence, scientists said.

“The most massive stars that make the heaviest elements in the universe, elements that are very important to life and us, explode because of neutrinos,” said Michael Turner, a cosmologist at the University of Chicago.

Scientists also don’t understand how any of the matter in the universe — stuff that includes us — exists at all. Theoretically, it should have all been annihilated in collisions with antimatter. Neutrinos might have turned the tide in our favor — a theory that’s also been investigated with the Super-Kamiokande experiment.

Neutrinos themselves can’t be seen. But on rare occasions, a neutrino particle just might hit an atom. And if you have the right kind of trap, you might be able to see the resulting interaction, a telltale sign that the neutrino was there.

Unfortunately, detecting these rare, unassuming interactions is like trying to hear a whisper at a heavy-metal concert. Earth is constantly being bombarded by so many other particles that it drowns out any signal from the neutrinos. So the scientists build detectors deep underground, using Earth’s bulk as a giant filter, which only neutrinos can easily pass through.

Using the Super-Kamiokande detector, a huge tank in an underground zinc mine holding 50,000 tons of super-purified water, Kajita and his team announced in 1998 that neutrinos they were studying, which were generated from cosmic rays hitting the Earth’s atmosphere, seemed to be changing flavors on their way to the detector because some of the muon neutrinos they had expected to reach the detector seemed to disappear.

At the Sudbury observatory, in a 12-meter-diameter tank filled with ultra-pure heavy water in an underground nickel mine, McDonald’s team was coming to a similar conclusion. In 2001, McDonald and his colleagues showed that some of the neutrinos generated by the sun — which produces only electron neutrinos — seemed to disappear before they reached the detector, even though the overall count of neutrinos, regardless of their flavor, stayed the same.

There was only one conclusion to be drawn from these two experiments on opposite ends of the globe: that the neutrinos were changing between the flavors, or oscillating.

“There certainly was a ‘eureka moment,’ ” McDonald said of the Sudbury experiment, who was quick to share the credit with the rest of the research team.

“Art is a consummate gentleman…. It’s a thrill to see him recognized in this way,” said Steve Brice, an experimental particle physicist at Fermilab who did graduate and postdoctoral work at the Sudbury lab.

“It’s high-risk science,” Turner said of neutrino-hunting. High-energy particle smashers such as the Large Hadron Collider (which recently discovered the Higgs boson, leading to a 2013 physics Nobel) can be used for a host of other purposes, even if they don’t find what they’re looking for. That’s far less true for neutrino detectors, where scientists must wait for the universe to deliver.

“They’re both neutrino-whisperers,” said Turner, who knows McDonald and Kajita.

Before then, scientists had thought that neutrinos were massless particles. But in order for these particles to be able to switch flavors — between the electron neutrino, tau neutrino and muon neutrino — they had to have mass.

None of these questions are explained by the standard model of particle physics — a model that, in its classical form, assumed neutrinos to be massless. Scientists hope that probing the cracks in this model — in part through studying neutrinos — may help lead researchers to what Turner called a “grander theory” that explains these mysterious phenomena.

The two scientists will share the prize of 8 million Swedish kronor, or close to $1 million.

Posted on October 8, 2015, in Postings. Bookmark the permalink. 1 Comment.

← “Fundraising is getting easier because pension funds, insurance companies, sovereign-wealth funds and other institutions increasingly are seeking the kind of yield the riskiest real-estate funds – known as “opportunity funds” – are offering…
“Rockstrom begins his argument with a reminder that for most of the earth’s 4.5-billion-year history its climate was not very hospitable to human beings, as it oscillated between “punishing ice ages and lush warm periods” that locked humanity into seminomadic lifestyles… →