← “(Brookings Institution President) Mr. Talbott will learn that the left’s goal is not more disclosure. The left’s goal is silencing critics. In Washington, that’s especially true for research such as cost-benefit analysis that highlights risks from too much regulation. “, L. Gordon Crovitz, WSJ
“I saw some of this on my trip to India in the mid-2000’s. We are so lucky to be Americans. To me, the reasons, despite a pretty developed democracy, are as follows: →

“Seriously? Dean Judy Olian and UCLA’s business school has an “unconscious bias” against women? In this day and age? I don’t believe it and I think the Dean and Korn Ferry (who produced the report) should be embarrassed about this “PC” conclusion…

…Look, common sense tells me (and should tell them) that there are a couple of fundamental issues at work here. First, women and men, for various reasons, tend to gravitate to different educational and career choices. For example, my son is a graduate student in electrical engineering and the engineering school he attends is only about 30% female. That may be an extreme female/male ratio (because the school is mostly engineers), but the logic holds for other educational and career activities, including business. So, if you force faculties into “PC” female/male ratios of 50/50…..you are objectively/statistically going to hire less qualified women and discriminate against more qualified men. Second, tenure I am sure plays a big role. A tenured professorship at a prestigious graduate business school like UCLA (until this dumb article!) is a great job, where faculty turnover is low and no one (even poor or mediocre performers) is ever forced to leave, because of tenure. So it take years to make a change and even then if you are being fair/objective and NOT PC, qualified men should get the vacant position at least half the time (probably somewhat more than half the time given the percentage of qualified men in business education vs. women). The article below says that the percentage of full-time female professors at UCLA’s graduate school has grown from just 2% in 2009 to 13% today, that is a more than 6-fold increase in just six years. Any objective, statistical analysis of that fact would likely conclude the opposite of Korn Ferry and UCLA. In other words, the numbers say it is more likely that more qualified men are now being discriminated against at UCLA than women! That’s my common sense guess as to what’s really happening at “PC” UCLA and Judy Olian’s business school these days.”, Mike Perry, former Chairman and CEO, IndyMac Bank 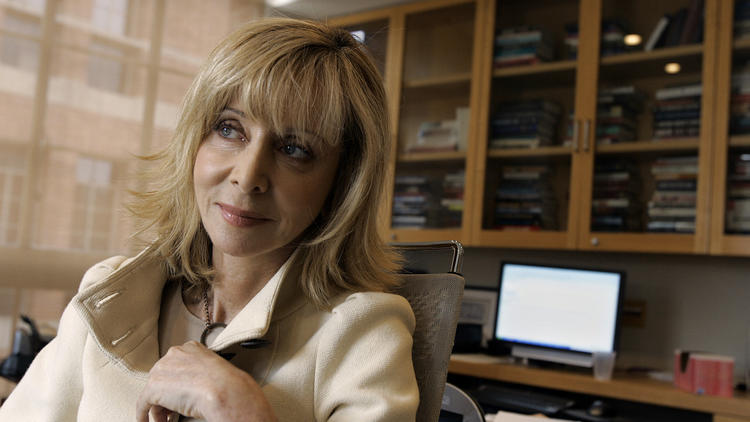 Dean Judy Olian of the UCLA Anderson School of Management promises improvements in the treatment of women faculty.

UCLA’s Anderson School of Management has a culture that hurts the hiring and promotion of women through both institutional and “unconscious bias,” according to a new report commissioned by the graduate business school.

The Korn Ferry consulting firm’s report being released Thursday urges changes in recruitment, promotion and leadership styles at the school, which is led by a woman, Dean Judy Olian, but has only 18 women on the 82-person faculty. Among other things, the study calls for more forceful action by Olian for “gender equity.”

Many highly-rated graduate business schools across the country are male-dominated both in student enrollment and faculty. At Anderson, complaints about such an environment have been simmering for a decade.

An internal report in 2006 focused on why women faculty were leaving the school at a high rate and a 2013 study by the campus-wide faculty Senate found the business and management school “inhospitable to women.”

The new report does not call for the removal of Olian, who has been dean since 2006. But it states that Anderson leaders “have not demonstrated the focused intention and proactive behavior required to increase diversity.”  And it said that “many faculty do not trust the dean and do not believe she is serious about gender equality.”

Olian, in an interview, said she accepts the report’s recommendations and will work to implement them.

“It’s somewhat painful. But it’s something we are all learning from,” she said, adding that she is going to “loudly and forcefully” lead efforts for change at the school.  She and a faculty committee commissioned the study.

The share of women professors at Anderson has increased in recent years, from 16% in 2009 to what will be 23% later this school year with the arrival of a new hire, according to statistics provided by the school. Only 13% of the full professors are women, up from just 2% six years ago.

A survey by the Financial Times showed that many elite business schools have similar shares of women on faculty. It showed that Harvard has 25% and Columbia 17%, for example. But it also showed that UC Irvine and UC San Diego’s schools both have more than 40%.

The Korn Ferry report says that faculty promotion standards tend to value quantitative fields, such as economics and finance, more than the non-quantitative fields such as management and social psychology in which women are more heavily represented. It urges that the research and expertise in non-quantitative and interdisciplinary fields be given more weight than they had in the past.

The study also found that male students — who make up two-thirds of the student body in the main degree programs — treat women professors with more skepticism and in some cases outright disrespect compared to male faculty. The Korn Ferry consultants urge zero tolerance for such behavior.

Professor Aimee Drolet Rossi, a psychologist who is an Anderson professor of marketing, said many business schools around the nation have similar problems and that Anderson should be lauded for such rare self-examination.

“As much as the report shows the warts and all, I’m just happy that it’s addressing the issue,” she said. She said that it would be unfair to put too much blame on Olian since the faculty control much of the hiring process and “we all need to take responsibility for the climate.”

At UCLA, women make up half of the faculty in the field of education but their representation goes down in other disciplines, as low as 16% in the physical sciences and 13% in math, computer science and engineering, according to data from the campus.

Korn Ferry consultants conducted confidential interviews and surveys with faculty and others at the school.  The report cost $168,000, though none of it from state funds, since Anderson has become self-supporting.

Posted on October 15, 2015, in Postings. Bookmark the permalink. Leave a comment.

← “(Brookings Institution President) Mr. Talbott will learn that the left’s goal is not more disclosure. The left’s goal is silencing critics. In Washington, that’s especially true for research such as cost-benefit analysis that highlights risks from too much regulation. “, L. Gordon Crovitz, WSJ
“I saw some of this on my trip to India in the mid-2000’s. We are so lucky to be Americans. To me, the reasons, despite a pretty developed democracy, are as follows: →