← “Greed. Someone pointed out that blaming economic crises on “greed” is like blaming plane crashes on gravity. Certainly planes wouldn’t crash if it wasn’t for gravity. But when thousands of planes fly millions of miles every day without crashing, explaining why a particular plane crashed because of gravity gets you nowhere…
“Deflategate and the N.F.L.’s inappropriate behavior reminds me of the liberal politicians and press views that the 2008/2009 financial crisis was caused by greedy and reckless Wall Street/bankers. The data and facts don’t bear either out.”, Mike Perry, former Chairman and CEO, IndyMac Bank →

“Robert Gates was a government bureaucracy “polisher” who never had any competition. Steve Jobs built private sector businesses from scratch, employed tens of thousands, created tens of billions in shareholder value and built highly desirable products and services for the World…

…Of course you can always be civil and never work on Saturday’s when you don’t create or build anything, don’t have any competition, and it’s nearly impossible to determine if you did well or poorly!”, Mike Perry

Advice From the Anti-Steve Jobs

Gates preaches the value of civility and of work-life balance. While heading the Pentagon, he says, he never went to the office on a Saturday.

It has become almost a ritual of American politics to ask officeholders and candidates to disclose what books they happen to be reading. The titles they offer can seem like political posturing even if, by chance, they are not. In 2014 Hillary Clinton told the New York Times that Maya Angelou’s “Mom & Me & Mom” was on her nightstand and John McCain’s “Faith of My Fathers” on her bookshelf. At the moment, more than one candidate may be (discreetly) thumbing through “The Art of the Deal.” But the book they should all admit to reading—and actually read—is “A Passion for Leadership” by Robert M. Gates.

Mr. Gates is best known as secretary of defense, first under George W. Bush (replacing Donald Rumsfeld) and then under Barack Obama (until 2011). But his public service began in the 1960s, and in the intervening years he worked in several senior posts, including a stint as CIA director under George H.W. Bush. Drawing on his own experience and his observations of others at the highest echelons of power, Mr. Gates has compiled a list of recommendations for leaders of all sorts—from Boy Scout troop leader to branch manager to corporate CEO to cabinet secretary—with a special emphasis on the challenges of guiding a large organization.

Many of Mr. Gates’s recommendations are common sense (as he acknowledges): set deadlines, don’t micromanage change, empower subordinates, cooperate with the media, be prepared to act alone. As obvious as such advice may seem, it bears repeating because it is so routinely ignored. Among the more surprising suggestions: Don’t focus on reorganizing staff or structure, since it is distracting to the organization; be wary of consensus (which “inevitably yields the lowest common denominator”); and set short deadlines (doing so will “focus attention on an effort and signal its importance, creating momentum”). 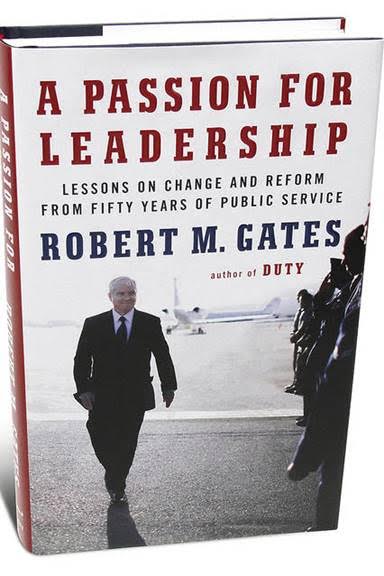 A PASSION FOR LEADERSHIP

Confronted with President Obama’s wish to end the ban on openly gay people serving in the military, Mr. Gates describes how he set up a task force, which surveyed 400,000 service members and 150,000 service spouses, and held multiple focus-group meetings. “The review group paved the way for successful incorporation of the biggest personnel policy change in the U.S. military since women were brought into the ranks in significant numbers,” he writes. Among the keys to success in this case, he says, were inclusiveness and open internal debate.

The same principles applied when he was faced with cutting dozens of major defense programs. Believing that leaks would undermine his proposals, he “led an intensive consultative process” with military and civilian leaders and asked all participants to sign a nondisclosure agreement. In the end, Congress didn’t block his proposals, which he attributes to getting “buy-in” from the senior officials who were consulted.

Befitting the only cabinet official to serve in both the Bush and Obama administrations, “A Passion for Leadership” is refreshingly nonideological. Implicit in his recommendations is that there is no “Republican” or “Democratic” way of leading. Indeed, there is as much in the book for Mrs. Clinton as there is for Donald Trump.

Mr. Gates appears to be the polar opposite of the leader who has been deified in recent years: the late Apple founder Steve Jobs. Where Jobs was often a petty tyrant who prized secrecy, Mr. Gates preaches the value of civility, internal transparency and work-life balance. (He boasts that, while heading the Pentagon, he never went to the office on a Saturday.) He praises the CEO of Starbucks, Howard Schultz, for communicating with all the company’s employees on strategy, culture and performance.

But there are fewer compliments than criticisms in “A Passion for Leadership.” Mr. Gates indicts many of those charged with overseeing major institutions—Congress, universities, corporations—for their parochialism and short-term outlook. He asserts that, in the public sector, leaders “vary dramatically in expertise, diligence, understanding, and just plain smarts,” adding that many “haven’t got a clue about how to run anything.”

Mr. Gates unloads on the former Republican governor of Texas (and two-time presidential candidate) Rick Perry. Mr. Gates recounts that, upon his being offered the presidency of Texas A&M, Gov. Perry privately pressured him to withdraw. (Mr. Perry had reportedly promised the job to former Texas senator and A&M professor Phil Gramm.) Mr. Gates stood firm and served at A&M in 2002-06 but says that he and Mr. Perry had an “adversarial relationship” for his entire tenure. “The governor was a pain in the neck.”

But Mr. Gates kept his feelings about Mr. Perry private and emphasizes throughout the book that, in general, it behooves leaders to schmooze with the governing class, since small deeds can pay lasting dividends. He once wrote a letter to the Washington Post defending Sen. Robert Byrd following a critical editorial. “This small gesture,” he writes, “made Byrd my friend and personal ally on the Hill” when he was CIA director and, later, at the Pentagon.

While Mr. Gates’s book may persuade some readers to take the rudiments of authority and command more seriously than before and even pursue leadership training—part of the multi-billion-dollar “leadership industry”—Mr. Gates notes that his only formal training came in 1959, when he attended a program sponsored by the Boy Scouts, an organization he now heads. He is skeptical that leadership qualities—such as devotion to duty, sincerity, fairness and good cheer—can be taught in a classroom. “How can any training program inculcate personal character and honor?” When it comes to office holders and office seekers, questions of character may be even more important than their reading lists.

Mr. Rees, who served in the Bush administration in 2001-05, is president of the speechwriting firm Geonomica and a senior fellow at Dartmouth’s Tuck School of Business.

Posted on January 25, 2016, in Postings. Bookmark the permalink. Leave a comment.

← “Greed. Someone pointed out that blaming economic crises on “greed” is like blaming plane crashes on gravity. Certainly planes wouldn’t crash if it wasn’t for gravity. But when thousands of planes fly millions of miles every day without crashing, explaining why a particular plane crashed because of gravity gets you nowhere…
“Deflategate and the N.F.L.’s inappropriate behavior reminds me of the liberal politicians and press views that the 2008/2009 financial crisis was caused by greedy and reckless Wall Street/bankers. The data and facts don’t bear either out.”, Mike Perry, former Chairman and CEO, IndyMac Bank →