← “Despite Mnuchin’s New York business credentials, one of his most notable financial bonanzas came via a regional commercial bank based in sleepy Pasadena…
“It’s 2016 and the U.K. still hasn’t sold its stakes in Too Big to Fail banks, yet the dummies at the FDIC fire-sold IndyMac Bank in 2008, in less than six months, right at the worst possible moment of the financial crisis!”, Mike Perry, former Chairman and CEO, IndyMac Bank →

“As the head of the S.E.C., you’ve got to get back into reffing the game properly and end the demonization of Wall Street,” Mr. Scaramucci said in an interview last week…

“I could not agree more. Under President Obama, and with significant pressure from the most liberal wings of his party (Elizabeth Warren, etc.) as a result of the financial crisis, the S.E.C. became politicized, abandoned The Rule of Law, and overreached in many cases, especially under former Chairman Schapiro. That unfair and un-American overreach damaged the rights and reputations of many innocent Americans like myself. It wasn’t right and I am very hopeful that under President Trump, we will see a new and better S.E.C. that follows The Rule of Law, without regard to person or popularity.”, Mike Perry, former Chairman and CEO, IndyMac Bank

Mary Jo White to Step Down as S.E.C. Chief

By BEN PROTESS and ALEXANDRA STEVENSON 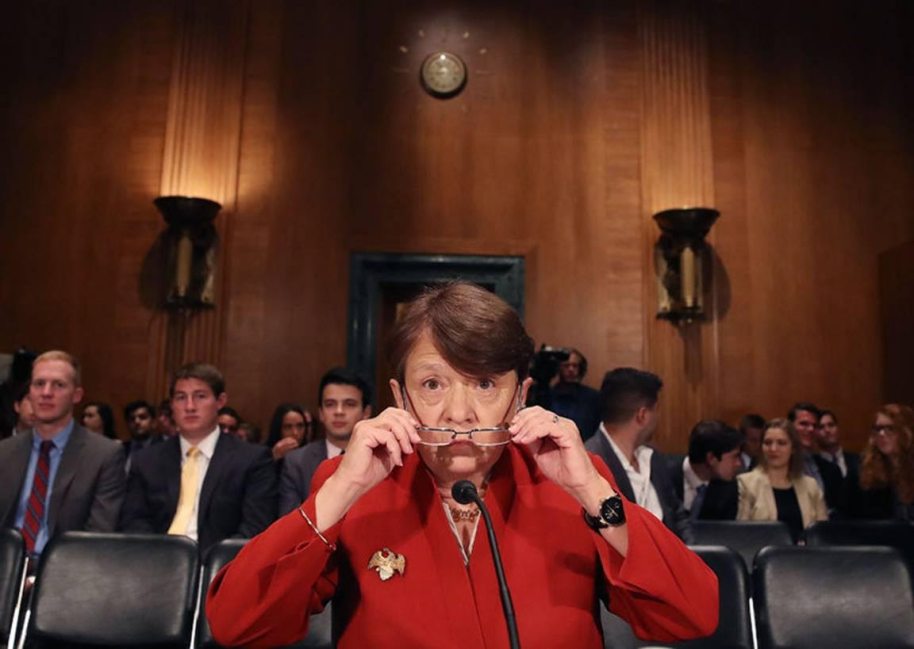 Wall Street regulators began an exodus from Washington on Monday as Mary Jo White, the chairwoman of theSecurities and Exchange Commission, announced plans to leave the agency.

The decision makes Ms. White, a former federal prosecutor who has served more than two decades in the federal government, the first major Obama administration appointee to step down after Donald J. Trump’s upset victory last week. Other financial regulators are expected to follow suit in the coming weeks.

The election of Mr. Trump is a game-changer for the S.E.C. — and for that matter, all financial agencies.

Ms. White was expected to leave no matter the outcome of the election. But many Democrats had hoped that if Hillary Clinton won, she would choose a strong proponent of regulation to succeed Ms. White, whose policies often reflected a political middle ground. Now, the agency is almost certain to be pushed to the right.

The president-elect’s biggest move on Wall Street could be his choice for Treasury secretary. Mr. Trump’s short list is said to include Steven Mnuchin, an investment manager and former Goldman Sachs partner who was Mr. Trump’s campaign finance chairman, and Representative Jeb Hensarling, Republican of Texas and chairman of the House Financial Services Committee.

Mr. Hensarling is still being considered, in part because of pressure from Congress, but Mr. Mnuchin is the favorite of Mr. Trump’s Wall Street backers, according to someone with direct knowledge but who was not authorized to speak publicly. A decision is expected within 10 days.

Either way, the Trump Treasury Department might rein in the Financial Stability Oversight Council, a collection of regulators who examine financial risks and designate companies as systemically important. The Treasury secretary is chairman of the council and could effectively defang it, according to Ian Katz, a policy analyst at Capital Alpha who predicted that the council might essentially become “a quarterly kaffeeklatsch.”

Mr. Trump was elected at a pivotal time for the S.E.C., an agency that had already turned a corner under Ms. White. Unlike Mary L. Schapiro, who inherited a scandal-plagued S.E.C. after the financial crisis, Ms. White needed not to save the agency, but to modernize it, a task that the next administration also will face.

Ms. White’s departure, which will take effect at the end of the Obama administration in January, will set off speculation about whom Mr. Trump will select to succeed her. Though such talks have barely begun, the field of potential contenders could include Michael S. Piwowar, a Republican commissioner at the agency.

Paul S. Atkins, a former S.E.C. Republican commissioner who has advocated deregulatory policies, is leading Mr. Trump’s effort to select a new chair for the agency and could be a candidate. Anthony Scaramucci, a hedge fund manager who supported Mr. Trump’s candidacy, is also advising the transition team.

“As the head of the S.E.C., you’ve got to get back into reffing the game properly and end the demonization of Wall Street,” Mr. Scaramucci said in an interview last week before his appointment to Mr. Trump’s transition team.

As other of President Obama’s financial regulators step down, the firewall around his Wall Street legacy will start to crumble. Timothy Massad, the chairman of the Commodity Futures Trading Commission, is expected to leave by early 2017, though he could briefly stay at the agency as a Democratic commissioner.

An even bigger change could occur at the banking regulators — the Federal Reserve, the Federal Deposit Insurance Corporation and the Office of the Comptroller of the Currency — which became a thorn in the side of Wall Street under President Obama. Martin J. Gruenberg and Thomas Curry, the leaders of the F.D.I.C. and O.C.C., will probably leave office next year when their terms expire, or possibly even sooner.

Daniel Tarullo, the Federal Reserve governor who oversees many of the central bank’s regulatory efforts, is not expected to serve out his term through early 2022. He could leave early next year, which would deliver a blow to proponents of Wall Street regulation.

With turnover at the S.E.C., Ms. White’s legacy could be in jeopardy as well.

She oversaw a record number of enforcement actions and directed a rapid pace of rule-writing based not only on Dodd-Frank, but on regulations of her own making. Those initiatives were aimed at improving money market fund regulation and the broader asset management industry.

“I think what we’ve done so far has been quite transformative and really modernized that core responsibility,” Ms. White said in a recent interview.

Yet Ms. White has not completed more than a dozen rules, nor has she formalized a plan to require that financial advisers act in their clients’ best interests. Now that these initiatives will fall into the hands of a Republican chairman, they may come off the agenda.

As it was, Ms. White, a political independent, drew criticism from liberal lawmakers who view her as the quintessential moderate. Senator Elizabeth Warren, the Massachusetts Democrat who channels the populist outrage over Wall Street excess, even called on President Obama to designate a new S.E.C. leader because the agency had not required companies to disclose political contributions.

In her first public remarks on the subject, Ms. White said in an interview that the criticism “really does come with the territory.”

“I think I’m a very constructive recipient of constructive criticism,” she said, adding: “It’s not like you like people to beat on your head, whoever they are, however baseless it is.”

“She’s not motivated by any special interest,” said Preet Bharara, a prosecutor under Ms. White who is now the United States attorney in Manhattan. “People may disagree from time to time, and, in fact, in any high-stakes environment, it would be unnatural if there weren’t disagreement from special interests and adversaries. But she’s hyper smart and makes a decision immune from any political wind or political criticism, and I think that’s a good way to be.”

Ms. White’s prosecutorial experience — she supervised the original investigation into Osama bin Laden — raised expectations for her enforcement agenda at the S.E.C.

And in its last fiscal year, the agency brought a record 548 stand-alone enforcement actions. In conjunction with Andrew J. Ceresney, the agency’s enforcement director, Ms. White reversed the S.E.C.’s longstanding yet unofficial policy of allowing companies to neither admit nor deny wrongdoing. Seventy-three such admissions have been made since.

Other “firsts” occurred under Ms. White and Mr. Ceresney: the first action against a major ratings firm, Standard & Poor’s, and the first action against a company, KBR Inc., for inserting overly restrictive confidentiality agreements that could stifle whistle-blowers. Some of the agency’s most novel cases came against private equity firms that failed to disclose fees and conflicts of interest.

Ms. White is known for keeping a workaholic’s schedule. Colleagues said it was common for her to hold a 9 p.m.Sunday conference call, before dispatching middle-of-the night emails and placing a 5:30 a.m. call to senior staff.

But she also promoted staff morale by holding coffee and doughnut sessions. Every holiday season, she would give a party for her staff at Rosa Mexicano restaurant, where she would hand out gifts to each of her aide’s children.

Ms. White, a partial Yankees season ticket holder whose favorite moment as S.E.C. chairwoman came when throwing out the first pitch at a Washington Nationals game, said her dream job would be the first female baseball commissioner.

“I really don’t think about what I’m doing next until I’m done,” she said, except, “If you have baseball commissioner to offer me, then I can tell you what my plans are.”

A version of this article appears in print on November 15, 2016, on page B1 of the New York edition with the headline: S.E.C. Chief Among First to Plan Exit.

Posted on November 16, 2016, in Postings. Bookmark the permalink. Leave a comment.

← “Despite Mnuchin’s New York business credentials, one of his most notable financial bonanzas came via a regional commercial bank based in sleepy Pasadena…
“It’s 2016 and the U.K. still hasn’t sold its stakes in Too Big to Fail banks, yet the dummies at the FDIC fire-sold IndyMac Bank in 2008, in less than six months, right at the worst possible moment of the financial crisis!”, Mike Perry, former Chairman and CEO, IndyMac Bank →