← ““If we’re not bringing a certain kind of case, it’s because the evidence is not there — pure and simple,” Mr. Bharara said in 2014 in a wide-ranging interview with Worth magazine about why he never prosecuted a bank C.E.O…
“Here’s the deal, either we believe in the limited liability company or we don’t… →

Chuck Schumer Knows His Attack on Neil Gorsuch Is a Fraud 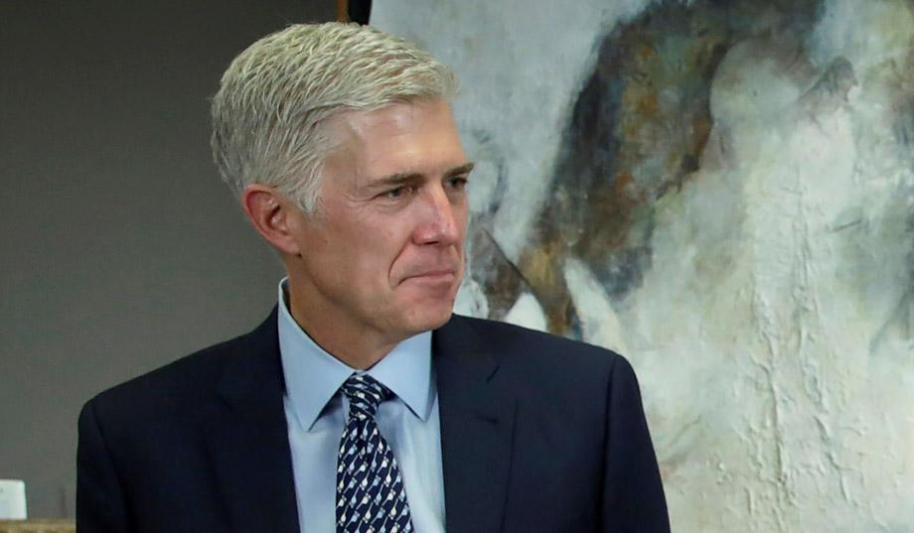 Supreme Court justices aren’t politicians or legislators — they’re to consider the law as it stands, not angle for their preferred policy outcomes.

Charles E. Schumer, besides being minority leader of the U.S. Senate, is a graduate of Harvard Law School, Class of 1974, so it seems reasonable to think that, between the two, he has at least glanced at the oath required of Supreme Court justices:

I, _________, do solemnly swear (or affirm) that I will administer justice without respect to persons, and do equal right to the poor and to the rich, and that I will faithfully and impartially discharge and perform all the duties incumbent upon me as _________ under the Constitution and laws of the United States. So help me God.

Then again, perhaps not. On Wednesday morning, Senator Schumer and his Democratic colleagues held a press conference on Capitol Hill, featuring — in the words of a press release announcing the event — “people harmed by Judge Gorsuch decisions,” who “raise serious concerns about [Gorsuch’s] record of siding against working Americans, for the powerful few.”

This is, as Senator Schumer surely recognizes, a stupid way to think about constitutional law.

Of course, it happens to be the way many people — not least Senate Democrats and their confreres in the media and elsewhere — think about constitutional law these days. To accompany Schumer’s presser, the New York Times published an exposé touting Gorsuch’s “web of ties to [a] secretive billionaire.” The “secretive” billionaire in question is oil-and-gas magnate Philip F. Anschutz, who is so “secretive” that he owns The Weekly Standard, financed the Walden Pictures film The Chronicles of Narnia: The Lion, the Witch and the Wardrobe, helped to found Major League Soccer, and is the namesake of the Anschutz Library and Anschutz Sports Pavilion at the University of Kansas. Gorsuch’s nefarious tie to Anschutz is that, while working for a prominent D.C.-area law firm, Gorsuch, who is from Colorado, helped represent the Anschutz Company, which is headquartered in Denver.

Nevertheless, Democrats have chosen their line: In Schumer’s words, Gorsuch has repeatedly sided “with the powerful against the powerless.”

Or maybe he has simply sided with . . . the law. Ironically, the three cases Senate Democrats highlighted on Wednesday show precisely that.

Patricia Caplinger brought a lawsuit against medical-device company Medtronic in 2012, alleging that the company violated the Medical Device Amendments (MDA) to the Federal Food, Drug, and Cosmetics Act. Caplinger suffered complications after having a Medtronic bone-growth product surgically implanted, and she accused Medtronic of concealing pertinent medical information. Gorsuch, writing for the 2–1 majority, sided with the district court against Caplinger. The final paragraph of the decision read:

Not everyone may agree with how Congress [by means of the MDA] balanced the competing interests it faced in this sensitive and difficult area. We can surely imagine a different statute embodying a different judgment. But strike a balance Congress had to and did, and it is not for this court to revise it by beating a new path around preemption nowhere authorized in the text of the statute and nowhere recognized in any of the Supreme Court’s many forays into this field.

In other words, Gorsuch applied the law as written to the facts of the case at hand.

He took the same approach in the case of the late Grace Hwang. In 2009, Hwang, a professor at Kansas State University, was diagnosed with cancer. She received a six-month paid leave of absence, in accordance with the school’s policy. Toward the end of that period, in early 2010, she applied for the university’s long-term disability benefits, which required her to resign. After trying to negotiate a different arrangement, Hwang accepted, but she subsequently sued the university for violating the 1973 Rehabilitation Act, which prohibits recipients of federal funds from discriminating on the basis of disability. Gorsuch, writing for the 3–0 majority and again affirming the lower court, explained:

Ms. Hwang’s is a terrible problem, one in no way of her own making, but it’s a problem other forms of social security aim to address. The Rehabilitation Act seeks to prevent employers from callously denying reasonable accommodations that permit otherwise qualified disabled persons to work — not to turn employers into safety net providers for those who cannot work.

By Ms. Hwang’s own admission, he notes, she was incapable of working. Continued Gorsuch:

It perhaps goes without saying that an employee who isn’t capable of working for so long isn’t an employee capable of performing a job’s essential functions — and that requiring an employer to keep a job open for so long doesn’t qualify as a reasonable accommodation. After all, reasonable accommodations — typically things like adding ramps or allowing more flexible working hours — are all about enabling employees to work, not to not work.

This is not “heartless.” (Hwang’s family’s description of Gorsuch in an op-ed published in the San Francisco Chronicle on Wednesday; her daughter, Katherine, was present for Schumer’s press conference.) It’s an application of the law to the facts of the case. It’s worth noting that the two other judges on the Tenth Circuit agreed that Hwang had insufficient legal grounds for her complaint.

Finally, there is Alphonse Maddin. Maddin was fired by TransAm Trucking in January 2009 for abandoning the trailer of his truck; when the trailer’s brakes froze in subzero temperatures, and after he had waited several hours for assistance, he unhitched his truck and drove away, leaving the trailer behind. In fact, the Tenth Circuit majority decided for Maddin. He was apparently “harmed” by Gorsuch’s dissent in the case.

Writing against the two-judge majority, Gorsuch demonstrated that his fellow judges and the Department of Labor (which backed Maddin’s claim) had misconstrued the statute — the Surface Transportation Assistance Act — that Maddin claimed TransAm Trucking had violated:

It might be fair to ask whether TransAm’s decision was a wise or kind one. But it’s not our job to answer questions like that. Our only task is to decide whether the decision was an illegal one. . . . The trucker was fired only after he declined the statutorily protected option (refuse to operate) and chose instead to operate his vehicle in a manner he thought wise but his employer did not. And there’s simply no law anyone has pointed us to giving employees the right to operate their vehicles in ways their employers forbid. Maybe the Department would like such a law, maybe someday Congress will adorn our federal statute books with such a law. But it isn’t there yet. And it isn’t our job to write one — or to allow the Department to write one in Congress’s place.

Again, there is no hostility to Maddin here. (In fact, as Ed Whelan suggests, Gorsuch’s presentation of the case’s facts is more sympathetic to Maddin than the majority’s.) There is a dispassionate application of existing law — and a steadfast refusal to go beyond the law and conjure up an accommodation, even for someone who was in a tough spot. Democrats are happy to blur the line between Supreme Court justices and politicians, when it’s to their advantage.

Given the above, it’s worth asking: Do Senate Democrats want a Supreme Court justice who will apply the law as written? Or do they want a justice who will manufacture outcomes to benefit “sympathetic” petitioners?

Alas, the answer is clear. As they have done now for a number of years, Democrats are happy to blur the line between Supreme Court justices and politicians, when it’s to their advantage. When Senator Schumer uses cases like the above to suggest that Gorsuch will promote a “pro-corporate agenda,” he is not only misrepresenting Gorsuch’s record; he is misrepresenting the role of judges. Legislators and governors and presidents have agendas. Supreme Court justices have the Constitution and the statutes passed by Congress, which they are to consider impartially, without fretting about the “negative real-life implications for working Americans.” Senator Schumer doesn’t want a judge who will read and apply the law dispassionately. He wants an activist in a robe.

Neil Gorsuch is not that. Gorsuch is a judge who has time and again demonstrated his fidelity to the letter of the law, and his lack of concern with whether the outcome of his ruling is “conservative” or “liberal.” This is no small part of the reason that not one of the 200-plus opinions he has authored during his decade on the Tenth Circuit Court of Appeals has been reversed by the Supreme Court; and why, since his nomination to the High Court, legal analysts on both sides of the aisle have unreservedly praised him; and why even the famously left-leaning American Bar Association has declared Gorsuch “well qualified” (its highest rating) to sit on the Court.

Senate Democrats, despite their braying, are well aware that the “victims” paraded in front of the cameras on Wednesday are not the result of Judge Gorsuch’s malice, but of his consistent application of the law.

Gorsuch doesn’t side “with corporations” or “against corporations.” As one would want from a Supreme Court justice, he sides with the law. It says a great deal that Democrats are alarmed by that.

— Ian Tuttle is the Thomas L. Rhodes Fellow at the National Review Institute.

Posted on March 17, 2017, in Postings. Bookmark the permalink. Leave a comment.

← ““If we’re not bringing a certain kind of case, it’s because the evidence is not there — pure and simple,” Mr. Bharara said in 2014 in a wide-ranging interview with Worth magazine about why he never prosecuted a bank C.E.O…
“Here’s the deal, either we believe in the limited liability company or we don’t… →