← “Some have wondered how consumers, bankers, and MBS investors around the developed world could rationally think pre-crisis home prices would continue to rise. The public words and deeds of their Central Bankers (of the E.U. and U.S.) make abundantly clear that THEY are the ones responsible for creating and ingraining long-term, rational expectations of monetary inflation in the prices of goods, services, and assets; such as stocks, bonds, and homes.”, Mike Perry
“I’m no detective, but it looks like they (the Coronels) had themselves a really generous ATM machine…This is so typical, it’s tough to stomach. You’ll never see this side of the story in the media, but the Elizabeth Warrens of the world make a living off this narrative.”, Anonymous Reader of Blog Posting #504 →

“Do Scott Reckard and the L.A. Times have a real mortgage victim here? The Coronel’s started with a $6,329 first trust deed mortgage when they bought their home back in 1994 and pulled over $350,000 in cash out of their home in 11 different mortgage transactions…

…The mortgage lenders aren’t victims either (they made the loans), but the fact that the Coronel’s chose to use the equity in their home to live off, when many others would have chosen to pay off their $6,329 first mortgage and own their home free and clear, I don’t think makes them a victim either. Given the level of cash they pulled out of their home over the years, it looks to me like they might never have made any payments on their home mortgages, with funds they actually earned. And yet they were labeled a mortgage victim by advocates and the press, and that label allowed them to stay in their home and rent it (after losing it in foreclosure to Fannie Mae, who itself remains in government conservatorship) and now buy back their home for just $280,000; with a new FHA mortgage and a down payment of not even 2%; about $5,000. Yes, it is a tragedy when people lose their home to foreclosure, but if they really have no equity (because they never put much down in first place or they took all the equity out in cash) and can’t make their payments, is there a big difference between losing your home to foreclosure and the scores of renters who are evicted for non-payment each and every day? Maybe, because the Coronel’s lived there for a long time, but could they really have afforded to live there that long without pulling all that cash out?”, Mike Perry, former Chairman and CEO, IndyMac Bank

Mortgage giants’ stance against principal reduction may be softening 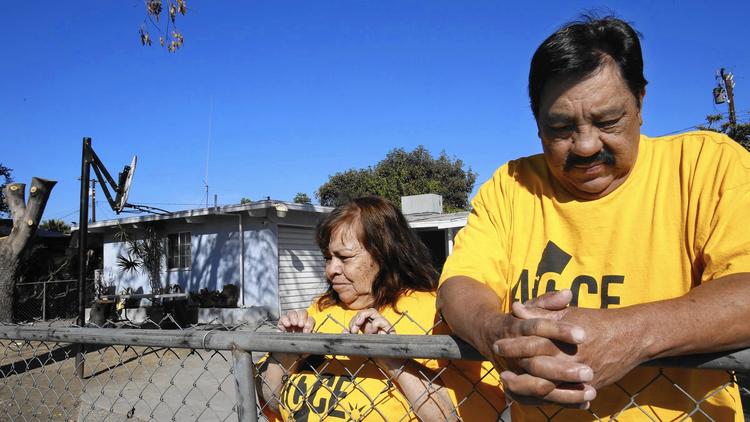 Juana and Jaime Coronel were granted a concession by Fannie Mae that lets them buy back their foreclosed Azusa home for far less than the debt that went into default. (Gary Friedman / Los Angeles Times)

Jaime Coronel’s pick and shovel sat idle when the recession made landscaping jobs scarce, and the home where he and his wife, Juana, raised four children fell into foreclosure. Mortgage giant Fannie Mae gave permission in 2010 for the Coronels to stay on in the Azusa house as renters.

“That was the best deal that we could get at the time,” said Peter Kuhns, a Los Angeles organizer of an activist group that took up the Coronels’ cause, disrupting banks and invading Fannie Mae’s Pasadena offices, a 20-minute drive from the couple’s working-class neighborhood. Religious and community leaders and state legislators joined in, lobbying on their behalf.

On Friday, the Coronels, now living on Social Security and Jaime’s pension as a union laborer, will throw a party to celebrate another Fannie Mae concession that lets them buy back their home for $280,000, far less than the $400,000-plus debt that had gone into default. The effect of the deal was to reduce the principal owed by the Mexican immigrants, enabling them to qualify for a new mortgage.

The go-ahead for the indirect reduction appears to mark a shift for Fannie Mae, which with its brother mortgage company, Freddie Mac, required a federal bailout in 2008.

Shrinking the mortgage amount that a homeowner owes has been done often in recent years to help underwater borrowers with loans not backed by Fannie and Freddie, in cases where foreclosing would be more costly for the lender or investors in the loan.

But in the six years since Congress created the Federal Housing Finance Agency to oversee Fannie and Freddie, the agency has never included mortgage principal reduction on its list of approved techniques to help homeowners in distress.

Now, the stance against principal reduction may be softening. The mortgage companies’ top federal regulator testified Wednesday that the concession was being accomplished by using another indirect strategy: transferring Fannie and Freddie loans to third parties, which then reduce the principal amount owed.

The housing industry will be watching closely, trying to discern if the Coronels’ deal is a one-time response to a lobbying campaign for sympathetic victims or a sign that Melvin L. Watt, appointed by President Obama a year ago to head the FHFA, is moving toward loosening the restrictions on principal reduction.

The ban on principal reduction outrages critics such as Sen. Elizabeth Warren (D-Mass.). She and others point to Treasury Department and congressional studies concluding that Fannie and Freddie would save themselves billions of dollars in foreclosure costs by reducing the balances on loans they guarantee.

The issue erupted Wednesday at a Senate Banking Committee hearing during which Warren berated Watt, who had been widely expected to lift the ban on principal reduction.

“Five million families lost their homes during the financial crisis. According to the latest data from CoreLogic, a leading housing market research firm, another 5.3 million homeowners remain underwater on their homes,” owing more than the homes would bring if sold, Warren said.

“I’ve asked about this repeatedly and you’ve said you’d look into allowing Fannie and Freddie to engage in principal reduction,” Warren said. “So I want to know why this has not been a priority for you. The data are all there!”

Watt testified that he had retained the restriction because sorting out which reductions would result in a “win-win” for the government and homeowners “has been perhaps the most difficult issue I have faced as director of the agency.”

He also told Warren that he already was allowing principal reductions in another indirect way — by using a neighborhood stabilization program to transfer mortgage debts to third parties, which then reduce the principal.

Watt said he expects to hammer out a policy on reducing loan balances in less than a year, but Sen. Robert Menendez (D-N.J.), chairman of a subcommittee on housing, pressed him to act more rapidly, saying “time is of the essence.”

Meantime, the Coronels, who have spent four years as renters in the home they owned for two decades, were ecstatic.

With help from advocates for low-income areas, the couple were able to qualify for a mortgage insured by the Federal Housing Administration based on their Social Security earnings, his payments from a pension plan and contributions from two other people living in the house.

The Coronels, who became U.S. citizens eight years ago, completed the repurchase of their 60-year-old, 1,268-square-foot home Oct. 23. They said through a translator that they were looking forward to working with Kuhns’ advocacy group, the Alliance of Californians for Community Empowerment, to help other immigrants in similar circumstances.

But first, said 63-year-old Jaime Coronel, they will have to finish unpacking clothing, photos and other belongings they had boxed up in case they were forced to move on.

Juana Coronel, 64, said she never considered moving from the small house, which is near the homes of her children and grandchildren and is filled with religious posters and a lifetime of family photos.

“I want to die in my house. It’s cost me many tears and a great deal of depression,” she said. “But now I’m content.”

Posted on November 25, 2014, in Postings. Bookmark the permalink. Leave a comment.

← “Some have wondered how consumers, bankers, and MBS investors around the developed world could rationally think pre-crisis home prices would continue to rise. The public words and deeds of their Central Bankers (of the E.U. and U.S.) make abundantly clear that THEY are the ones responsible for creating and ingraining long-term, rational expectations of monetary inflation in the prices of goods, services, and assets; such as stocks, bonds, and homes.”, Mike Perry
“I’m no detective, but it looks like they (the Coronels) had themselves a really generous ATM machine…This is so typical, it’s tough to stomach. You’ll never see this side of the story in the media, but the Elizabeth Warrens of the world make a living off this narrative.”, Anonymous Reader of Blog Posting #504 →