← “The challenge is that, in practice, this behavior looks an awful lot like the Fed stepping in to bail out the stock market — so much so that financial markets tend to price in lower future interest rates whenever there is a drop in the stock market, as has happened in the early weeks of 2016…
“Clearly, VW is not a sympathetic defendant, but this is why The Rule of Law and respect for The Constitution is so important. These “lynch mob” attacks by liberal government totalitarians (unelected officials and bureaucracies pursuing their own agenda) may eventually get resolved properly after years in court. In the meantime they create tremendous business cost and uncertainty… →

…and related financial and economic crises not on their own well-intended distortions of free and fair markets, but inappropriately on irrational consumers and the “greedy and reckless” private sector. This ironically then leads to more government central planning of our economy….like China! That makes no sense, right? Then why do so many Americans buy this false line (without reason) by liberals in our government? Think about this fact: The banking and mortgage lending businesses, even pre-crisis, were some of the most heavily government-regulated industries in our Country and whose financial activities/decisions could be easily distorted by the central bankers at the Fed through monetary policy. In other words, the reality is that higher government involvement/central planning seems to correlate with the increased risk of asset bubbles/busts and financial crises/economic instability.”, Mike Perry

Beijing aims to spur key sectors as growth slows, but officials are cautious about a buildup of debt 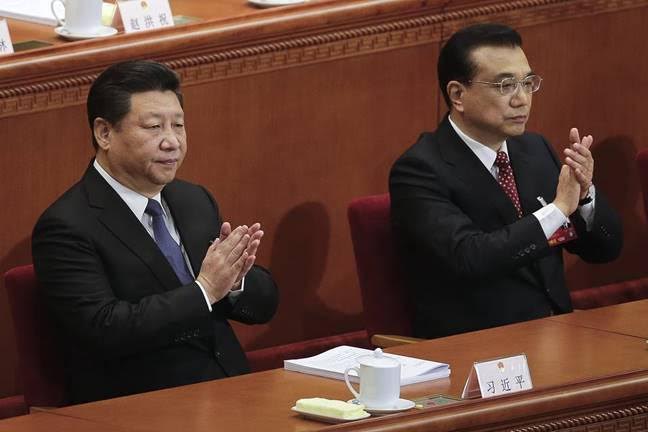 By Mark Magnier and Lingling Wei

BEIJING—China’s leaders made clear they are emphasizing growth over restructuring this year, but suggested they are trying to avoid inflating debt or asset bubbles as they send massive amounts of money coursing through the economy.

The government’s announcement of a 6.5% to 7% growth target for 2016 at the start of the National People’s Congress over the weekend came with subtle acknowledgment that some of its efforts to jump-start a persistently decelerating economy have misfired, failing to steer stimulus to the most productive sectors.

In his report to the annual legislative session, which opened Saturday, Premier Li Keqiang promised tax cuts that could leave companies with more money to invest. And for the first time, the Chinese government specified total social financing—a broad measure of credit that includes both bank loans and nonbank lending—as a metric for helping determine monetary policy.

In the past, leaders have just said total social financing should be kept at an appropriate level, while they have set clear targets for M2 money supply, which covers all cash in circulation and most bank deposits.

Both measures have increased sharply in recent months. But the money-supply measure fails to capture how banks and financial institutions use the funds. For instance, M2 jumped 13.3% last year while total social financing grew 12.4%, according to official data. The discrepancy indicates not all deposits were used by banks to make loans to companies; instead, some of the funds were tapped for such purposes as margin loans for stock-market speculation.

This year, the two targets are paired, with both set to rise 13%. “The government seeks to more accurately show where the money is going, and whether credit is being used to support the real economy,” said Sheng Songcheng, head of the central bank’s survey and statistics department, in an interview.

China’s past efforts to direct credit to entrepreneurs and other desired sectors of the economy have fallen short. And its loose monetary policy risks giving inefficient companies more room to avoid shutting down or retooling.

Much of China’s breakneck growth over the past two decades has been fueled by state-led investment and debt. Concerns about a credit buildup have grown as the economy has slowed.

The recent sharp rise in money supply—which rose 14% in January from a year earlier—“enlivens” capital markets but bears careful monitoring, said Fu Yuning, chairman of China Resources Holdings Ltd., a diversified conglomerate with interests from real estate to energy. “We are closely watching the financial risks that come from the increase in monetary supply,” Mr. Fu said on the sidelines of the National People’s Congress.

Companies’ financial liabilities now amount to 160% of gross domestic product, up from 98% in 2008, according to estimates by ratings firm Standard & Poor’s Financial Services LLC. That compares with around 70% for U.S. firms.

Bad loans reached 1.67% of bank portfolios at the end of 2015, according to the China Banking Regulatory Commission, the highest since June 2009. Analysts believe the figure widely understates the problem. Last week, Moody’s Investors Service downgraded its outlook for China’s sovereign debt, along with that of 25 financial institutions and 38 state-owned companies.

Xu Shaoshi, head of China’s planning agency, played down both both Moody’s concern about rising debt and fears of mass layoffs, saying that some companies have cut workers’ hours and salaries but have kept them on the payroll, and that new jobs are being created in the service sector and by private enterprises. “All predictions of a hard landing will definitely fail,” he told reporters on the sidelines of the legislative meeting Sunday.

China says it needs to post at least 6.5% growth through 2020 to double per capita income over 2010 levels in time for the Communist Party’s 100th anniversary in 2021.

Zhang Liqun, researcher with the State Council’s Development Research Center, said China can achieve that without undermining its reshaping of the economy. “Economic growth and restructuring are not contradictory,” he said.

But China’s plan to reform the state-owned sector is vague, suggesting that many debt-ridden giants will retain preferential access to markets and cheap financing, disadvantaging the entrepreneurs China is counting on to power the economy as manufacturing, foreign trade and investment weaken.

Private-sector delegates at the meeting were heartened by Mr. Li’s pledge to reduce corporate taxes and fees this year. “We just want to be treated equally, alongside state-owned enterprises,” said Chen Zhilie, executive chairman of EVOC Intelligent Technology Co. Ltd.

But many of the new engines that Beijing has identified to spur growth are untested in China. Mr. Li expects that 60% of China’s economic growth in coming years should come from scientific and technological advances, a sharp departure for an economy where spending on fixed assets such as factories and apartments accounts for half the output.

Among the spending pledges Mr. Li outlined over weekend was 800 billion yuan ($123 billion) for railway construction and 1.65 trillion yuan to build roads, in line with traditional formulas for investment-led growth, often via infrastructure projects.

Mr. Li said China would increase its budget deficit to 3% of GDP from 2.3% last year, a move that could allow authorities to cut taxes on businesses to free up more of their funds for innovation and other investments.

But economists said the move might have limited impact. According to calculations by Goldman Sachs Group Inc. and other banks, the actual deficit last year was closer to 3.5% of GDP when spending from off-the-books government accounts is included.

Officials at China’s central bank had urged policy makers to let the shortfall reach 4% or 4.5% of GDP, according to a recommendation reviewed by The Wall Street Journal.

—Chuin-Wei Yap contributed to this article.

Posted on March 8, 2016, in Postings. Bookmark the permalink. Leave a comment.

← “The challenge is that, in practice, this behavior looks an awful lot like the Fed stepping in to bail out the stock market — so much so that financial markets tend to price in lower future interest rates whenever there is a drop in the stock market, as has happened in the early weeks of 2016…
“Clearly, VW is not a sympathetic defendant, but this is why The Rule of Law and respect for The Constitution is so important. These “lynch mob” attacks by liberal government totalitarians (unelected officials and bureaucracies pursuing their own agenda) may eventually get resolved properly after years in court. In the meantime they create tremendous business cost and uncertainty… →